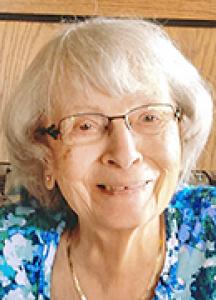 PROKOPCHUK: With heavy hearts we announce the passing of Nellie Prokopchuk (nee Kawka), age 96 on June 11, 2022 at Brandon Rideau Park Personal Care Home. Survived by children, Liz (Earl) Andrusiak, Iris (Dan) Sutherland, and Orville Prokopchuk, grandchildren Lisa (Barry) Chapman, Owen (Sandra) Andrusiak, Vincent Andrusiak, and Marissa Prokopchuk, great-grandchildren, Zachary, Arianna and Tanner Chapman, Madison and Carly Sutherland, Alison and John Andrusiak and Emily Popp-Andrusiak, as well as many nieces and nephews. She was predeceased 1949 by husband Peter, her only sibling brother Wally Baluk, son Orv's partner Connie Forman and recently her eldest grandchild, Dr. Dean Sutherland. Born August 8, 1925 in Winnipeg and raised in Angusville, MB by adoptive parents, as a child, she herded cattle, worked the fields, and did household chores. Later, she hired as a domestic worker for a polio impaired teacher who moved to Sandy Lake. She met Peter Prokopchuk and married November 1, 1942. Moving to Victoria, she worked as a hotel maid while Peter served in the military. He was injured in training, and they returned to Sandy Lake. Blessed with two daughters, Peter passed away four months prior to Orv's birth. Nellie and children briefly moved to Uncle Mikes Crawford Park farm, then she clerked at the Erickson Co-op before moving to Brandon to work at the Auction mart Restaurant, Lindenberg Seeds, and McCallum Jewelers until retirement. Nellie enjoyed summers at Sandy Lake and was active in the Seniors Drop-in Centre, a member of the Sandy Lake and Brandon Ukrainian Orthodox Churches, she participated in activities at the Brandon Ukrainian National Home and was a member of the Legion Ladies Auxiliary, and the Lesia Ukrainia Organization. Nellie enjoyed curling, gardening, card playing, bingo, coffee with her many friends, travelling, and clogging at Prairie Oasis. She was a very special lady who mainly enjoyed time with family who dearly loved her. She is sadly missed. Funeral service will be held at 10:00 a.m. Saturday, June 25 at St. Michael's Ukrainian Orthodox Church, Sandy Lake. Viewing for those that wish at 9:30 a.m. Internment at the Sandy Lake Municipal Cemetery. Donations in Nellie's memory may be made to Heart and Stroke Foundation of Manitoba, 1379 Kenaston Blvd., Winnipeg, R3P 2T5 or to a charity of one's choice.