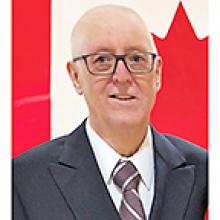 
Brian Cameron of East St. Paul passed away peacefully at the age of 72 at St. Boniface Hospital. He was the second of three children, born on June 18, 1949, to Douglas Cameron and Anne (nee Brokenshire) in the town of Melita, Manitoba.
Brian enjoyed being a part of Scouts and eventually rose to the highest honour of Queen Scout. He was highly involved in high school sports and was a great hockey player. He was high school president in his final year at Melita Collegiate where he graduated in 1967. Brian began working right out of high school for Wawanesa Insurance. He left to work with his father, Douglas, in Melita selling Muttart Manufactured Homes. Brian then went on to work in the movie theatre business starting as assistant manager at the Gaiety Theatre in Winnipeg, until he received his final promotion as District Supervisor for Famous Players for Manitoba and Saskatchewan. While expanding his career he also became manager of the St. James Canadians Hockey Club. In 1986, Brian purchased the Tyndall Motor Hotel and managed it successfully until his passing.
He leaves to mourn his son Craig (Haley), siblings, Dallas (Bryan), John (Shelley) along with many nieces and nephews, extended family and friends. Brian was predeceased by his loving wife Glenda (nee Tuttle) and parents.
Brian was a proud and beloved father and one of his proudest moments was being able to see his son become a member of the Royal Canadian Mounted Police.
Brian could often be found cheering for his beloved Winnipeg Blue Bombers, Winnipeg Jets and Canadian Curlers. Brian was a kind man and touched the lives of many people in his community and will always be remembered and thoroughly missed.
The family would like to thank the paramedics, nurses, and doctors at St. Boniface Hospital.
A private family service will be held.
Should family and friends so desire, please consider remembering Brian with a donation to the Canadian Kidney Foundation or CancerCare Manitoba Foundation.