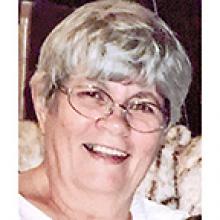 
Peacefully at the Grace Hospital on Tuesday, June 14, 2022, Dolores passed away at age 84.
Dolores is lovingly remembered by her children: son Andrew (Terri), their daughter Jennifer, son Arthur (Elianne), their children: Andrea, Aiyana, Thomas and Kaylan, daughter-in-law Sheila and her children, Daniel and Kailey; great-grandchild Zander, daughter Paula Zurbyk (Lyle) and their son Justin, son Ashley and his children: Michael, Tyler and Devin.
Dolores was predeceased by her husband Don, her parents, David and Isabella Welk, sisters, Marie Mills and Bernie Pritchard and brother Bud Welk.
Dolores was born in Rosthern, MB. She graduated from Hartney High School. She was a secretary for the Bank of Montreal in Hartney. On December 3, 1960 Dolores married Don Atkinson at Duck Lake, SK and they raised four children on the farm in Lauder and then Winnipeg, MB. Dolores enjoyed sewing, knitting, crocheting, playing cards, reading and gardening. As a family they camped many summers and did trips in their motorhome to BC, the East Coast and Disneyland. They also made two trips to Alaska in their motorhome. Later on Dolores and Don enjoyed their country music and attended the Detroit, Craven and Dauphin Country Fest.
In retirement Don and Dolores spent their first few winters at a condo in Gulf Shores, Alabama followed by many more winters at Magic Valley Trailer Park in Weslaco, Texas where they met and made many friends from all over Canada and the U.S.
A graveside service will be held in Lauder, MB.
In lieu of flowers, a donation can be made to Muscular Dystrophy or St. Vital Curling Club.