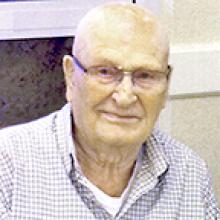 
It is with great sadness that we announce the passing of Joseph Balbon on June 11, 2022 at the age of 101 years old. He was predeceased by his wife Pauline, good friend Lucille Hill and son Richard.
Joseph came to Canada at the age of 10 from Lithuania. Starting out in Lundar, he eventually settled in Winnipeg and got a job with CN Rail working as a machinist and welder. He married Pauline in 1941 and they had a son Richard and daughter Doreen. They lived in the West End on Pearl Street, Sherbrook Street, and eventually moved to Melbourne Street in East Kildonan. In 1963, they purchased a cottage in the Whiteshell Park at Dorothy Lake, where they spent decades of enjoyable days.
Joseph retired in 1982 after 31 years of service with CN. Sadly in 1991, he lost his wife of 50 years, Pauline, to cancer. A short while later, he met Lucille Hill, with whom he enjoyed sharing time and travel for more than 27 years.
We are grateful for the care and compassion given by the Golden Door Geriatric Centre.
He will lovingly be remembered and missed by daughter Doreen (Klaus), daughter-in-law Maxine, grandchildren, John, Benita, Debra and Janet, great-grandchildren, Brittney, Dustin and Hayley, and great-great-grandchildren, Zola and Paxton.
A private family service was held.
Donations in his name may be made to a charity of choice.