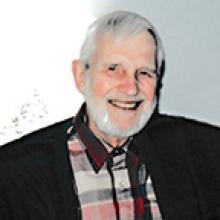 
It is with great sorrow that we announce the passing of our Dad, Grandpa, Papa GG, Uncle Bob at Deer Lodge Centre on June 13, 2022 at the age of 99 years.
He is survived by daughters, Janet (Dennis), Margaret (Dennis) and Ruth (Jim); granddaughters, Sara (Daren), Shannon (Larry) and great-grandchildren, Lexie (Matt), Olivia, Riley, Laine and Grace; numerous nieces and nephews; as well as many friends. He will be greatly missed.
He was predeceased by his wife of 62 years, Thelma and his sisters, Marie, Kay and Betty.
Bob was born and raised in St. James. He enlisted in the XII Manitoba Dragoons and proudly served until the end of the Second World War.
Dad met Mom, they married June 5, 1947 and settled in Charleswood where they remained for 60 plus years
He was employed at Eaton's and Deer Lodge Hospital as a painter.
Dad was a bit of a daredevil, either painting the highest outside windows at Deer Lodge, Paragliding in Kelowna or Tandem Skydiving, his last jump at the age of 91.
After retiring, he took pleasure in finding and restoring stationary engines then building trailers to transport them to Agricultural Shows in Manitoba, Saskatchewan and Minnesota.
In 2016, illness required that he move to Deer Lodge Centre. He made his room his home and the staff his friends.
The family would like to thank Tower 5 staff for their very kind and compassionate care shown to him, especially the last few days.
A private gathering will be held at a later date.
In lieu of flowers, a donation may be made to a charity of your choice.