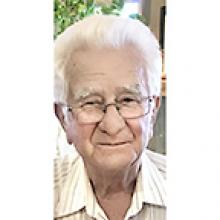 
Peacefully, after a short but brave battle with cancer, Vince passed away just shy of his 89th birthday, with his family by his side.
Vince leaves to cherish his memory, his sons, Agostino, Robert (Franca) and Mark (Reghan) and their mother, Giuseppa Scaletta as well as his treasured granddaughters, Paige, Sam and Alba. He will also be greatly missed by his siblings, Angela Porco, Maria (Alfred) Maida, Salvatore (Carla) Scaletta, Giuseppe (Diane) Scaletta, Anna (John) Scaletta-Moibrook and sister-in-law Salvatora Scaletta as well as 19 nieces and nephews and their families. Vince had many close friends who will miss him, and especially his good friend Wilma. Vince was predeceased by his sister Giuseppa (Bill) Martin, brother Ignazio, brother-in-law Francesco Porco and two infant siblings .
Vince was born in the town of Termini Immerse, Sicily. He and his family immigrated to Canada in 1951 when he was 17 years old. They settled in Winnipeg and in 1969 Vince moved his family to Brandon, MB, where he opened a grocery store on Queens Avenue East. A few years later he worked for his brother Iganzio at Scaletta Marble & Tile as one of Brandon's finest tile setters. In the early 1980s he worked at the base at CFB Shilo in the carpentry shop where he ended up retiring in 1990. He eventually moved back to Winnipeg where he was closer to his granddaughters. He spent many hours with them, watching their soccer games, and helping to tend the garden. Vince was also an excellent lawn bowler, representing the Province of Manitoba many times at the National Championships. This was a sport that allowed Vince to make so many friends, most importantly Morris and Cecile, and Wilma.
The most important thing to Vince was his family. His sons and his granddaughters were his pride and joy. One of his favourite pastimes was playing Italian cards with his brothers, but only when he was winning! Uncle Joe may now "burn the cards" as Vince is now always going to be up. A close second was his love of gardening, and sharing the bounty of his garden with his family and friends and neighbours. His family and friends were often the beneficiary of his fresh produce and the products of the garden, specifically his homemade pizza and sauce!
Our family wishes to extend our sincere thanks and gratitude to the family and friends who have provided support and company to Vince over the last few months since his diagnosis and well before that. We are extremely grateful to Uncle Joe and Auntie Diane for coming from Victoria to stay with Vince for the last few weeks. We also want to thank Vince's neighbours, Roger, Denise and Christian who helped look after Vince and his yard over the last few months. We also wish to thank the medical support team from CancerCare Manitoba, and the Palliative Care team for their guidance through this difficult time.
Mass of Resurrection will be celebrated on Thursday, June 23, 2022 at 10:00 a.m. in the Holy Rosary Roman Catholic Church, 510 River Avenue. Rev. Father Sam Argenziano celebrant. Private Entombment will follow at Green Acres Memorial Gardens, Hwy. 1 East at Navin Road.
In lieu of flowers, memorial donations may be made to CancerCare Manitoba, or Bowls Manitoba, 145 Pacific Ave, Winnipeg, MB R3B 2Z6 (e-transfer to bowls@shawbiz.ca), or please plant some flowers to enjoy and think of Vince.
A poem written by Vince's granddaughter Sam


To Vincenzo Scaletta
How are you doing?
I heard you went back to the hospital
I wish you didn't
I wish you weren't even sick
But that's just life, I guess
I know I'm losing my time with you
I wish I weren't
There's still so much that needs to happen
So many stories that may be lost
To the fate of time
Stories about when my dad was a kid
Stories from when you were a kid
Stories about Sicily
They're gripping on to not fall into the hands of the unknown
These are stories that need to be shared
With my sister and I
With our cousins
With our family
Our family who isn't here yet
These are stories of the Scaletta name
We can't lose them
To the hands of time