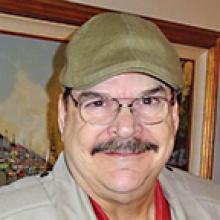 It is with a heavy heart that his wife Patricia announces the passing of her beloved husband of 49 years.
He was predeceased by his mother Bertha (Betty) Letendre, his father Adelard (Alec) Letendre, and his beloved grandmother Ethel Smee in Ryde, Isle of Wight, UK. He is survived by his two sisters, Jeannette (Jim) Preston and Irene (Les) Henschel.
Peter died peacefully in the University of Alberta Hospital (UAH) after a long struggle with his lung disease, idiopathic pulmonary fibrosis (IPF). Most people die within three to five years of being diagnosed but Peter was in his eighth year post-diagnosis. Special thanks to the caring nurses, doctors, and health care aides who treated Peter during his final stay in UAH.
Peter is a real survivor of many diseases: epilepsy diagnosed in his teens in the 1960s and had no seizures after his seizure medication was finally changed in 1990. He also suffered from recurrent bowel obstructions and had many operations; osteomyeletis (inflammation of the bone) in his left femur; venous stasis (inflammation of the skin in the lower legs due to chronic venous insufficiency), causing blisters that would get infected and need to be treated with antibiotics.
Peter was a grade 10 dropout and later took adult education classes and graduated with a BA in History and English Literature from the University of Winnipeg.
Despite all his diseases Peter was a volunteer for several organizations and supported his wife in whatever she wanted to do and kept her laughing with his humour for every day of their 49 years. He was a talented poet and sketched caricatures and was a kind and generous man to many people locally and worldwide. He was so glad that he got to travel with his wife extensively before his IPF diagnosis.
Along with his wife, Peter will be deeply missed by Patricia's two double cousins (their mothers were sisters and fathers were brothers): Wendy (Larry) Jackson and their daughters, Bonita and Robin of Manitoba; Benita Stafford-Smith and her son Joey of Muscat, Oman. Also by Peter's many dear friends: Eileen Hirst and Pamela Main of Edmonton; Marilyn Booker (Geoff), Milton Keynes, UK; Bernhild Vögel, Germany and Iceland.
There will be a short interment ceremony of Peter's ashes in the cemetery of St. Georges Wakefield Anglican Church located on Number 9 highway halfway between Clandeboye and Petersfield. It will occur on Tuesday, July 5 at 11:00 a.m.