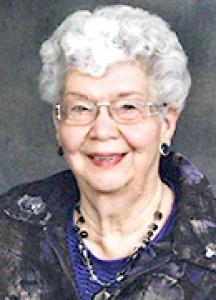 COLLI: In the early morning of April 30, 2020, Mavis Aileen Colli (Clarke) smiled her last smile in the physical world. Born on November 22, 1936 to George Henry Clarke and E. Evelyn Clarke (Tapp) in the Virden hospital. She lived her early life on the family farm in Harmsworth District taking her first 8 grades of schooling in a one room school known as the Montgomery School. When she turned 13, she moved to Virden to take her Grade 9–12. During those years, she lived either with family or friends, Jim and Norma Nicol. Graduating from High School in 1954, she then worked for a year at the Winnipeg Parliament Buildings. Following that mom moved back to Virden to work at the Post Office for another couple of years. On June 12, 1956 in a very small ceremony in the rectory of the Catholic Church, Mom married Ralph Colli. At this time, Mom joined the Catholic faith and remained a faithful Catholic for the rest of her life. Two years later they welcomed their only daughter, Merle. In October 1959 they had their first son, Grant. Mom as that era dictated was a stay–at-home mother. In the spring of 1964, Mavis and Ralph bought the homestead of Mark and Polly Cousins in Elkhorn, MB and moved there in May to start their journey into farming. In September of that year, they had their second son, David. This was quickly followed by the birth of the third son, Blaine in March of 1966. During those farming years, my mother played a very active role in their livelihood. She did everything from milking cows to driving truck during harvest. She had us living organically long before it became trendy to do so growing our own vegetables and raising our own meats. Very, very little was bought in a grocery store. Mom had us churning our own butter to making our own ice cream. Our kitchen table was always surrounded by family and friends of all ages. There was always plenty of home baked goods, conversation and laughter. In 1991, they decided to retire. Once Dad completed building of their new house, Mom moved back to Virden. She quickly adjusted again to town living joining the Women's Catholic League and the Horticultural Society. She also delivered Meals on Wheels. This move allowed her more time to devote to her hobbies of quilting, embroidering and knitting. She made everyone in her family knitted woolen socks to sweaters of all sizes. Her favorite shower gift was a pair of embroidered pillowcases or tea towels. Hand quilted quilts marked special occasions such as shower gifts to family members, baby first birthdays and graduations. She had quite a competitive streak. Nothing she enjoyed more than a good game of cards. She was also quite proficient in Scrabble and word games. August was planned around the Horticulture Society fair where she competed in every category she could. Winning the plaque for most points on more than one occasion. She rarely missed watching a curling game as she was an avid fan. To Mom every day was a new adventure, a chance to smile and to make new friends. Unfortunately, these adventures have now come to an end. She was predeceased by her husband, Ralph and parents, George and E. Evelyn Clarke Leaving behind to mourn her, daughter, Merle (Ken) Cashin, sons Grant (Marina), David (Charlene) and Blaine (Melanie) Colli. Grandchildren, Edward (Joanne), Chelsey (Andrew), Shane (Kayli), Stephen (Kristen), David John, Bob (Jane), Jessica (Marshall), Jeremy, Keith, Aro (Lexi), Stephanie, and Chantel (Brett) great-grandchildren, Kayleigh, Katrina, Ethan, Hannah, Sophia, Jack, Emily, Shawn, Corbin, Camden, and Carissa. Her brothers Ron (Mary Anne) and Ken (Gwen) and sister-in-law Mary Anne (Keith) Hagan. Numerous nieces, nephews, and cousins too many to mention by name but each held a special place in her heart. A private service was held in Virden Cemetery in August, 2020. In order to honor Mom's last wishes, we will be holding a private Celebration of Life. Please no cards nor flowers. We appreciated all that was done for us at the time of her passing.

Messages of condolence may be placed at www.carscaddenfc.com