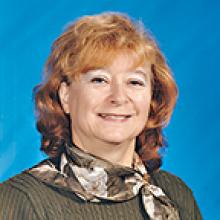 
It is with our deepest sadness that we announce the passing of Marlene Evelyn Scott (nee Wilson).
Marlene was predeceased by her husband Bryan Weldon Scott and her parents Fred and Eileen Wilson. Left to mourn her passing are her sons, Trevor (Sandra) and Darryl (Ashley), grandchildren, Weldon, Stella and Shea and Marlene's partner Jim Racette.
Marlene was born on April 8, 1945 in Winnipeg. She grew up in the Fort Rouge area and attended Churchill High School. As an only child, Marlene was very close to her parents. Many summers were spent near Basswood, MB at her grandparents' farm. Marlene also had several years of dance lessons which she enjoyed and were fond memories for her.
Marlene met Bryan when she was working at Manitoba Hydro and they were married in 1970. Following the births of Trevor and Darryl, Marlene stayed at home to raise her sons. She had very good friends in her neighbourhood; she also was talented at sewing Halloween costumes and making and decorating birthday cakes. She spent time volunteering in her community coaching soccer and supporting Cubs and Beaver groups. Marlene did not enjoy being on amusement rides or being in the car if anyone was driving too fast; this often provoked a response of grabbing the shoulder strap of the seatbelt; something her sons learned and would often tease her about when they were on family road trips. While she didn't swim, she would describe the water at West Edmonton Mall waterpark as bathtub water which was the perfect temperature for her. She ended up volunteering at General Byng school and eventually started working there full-time in 1986. She was at the hub of the school working in the office and developing many close friendships with her colleagues. 1990 to 1991 was a challenging year for Marlene, losing both of her parents and Bryan within a very short period of time.
Marlene met her partner, Jim, in 1995 on Valentine's Day. They enjoyed spending time together going to the weekly stock car races at Victory Lane. They also enjoyed spending time at the Fort Rouge Legion or the Rockwood Army & Navy. Marlene loved dancing and if it was karaoke night, she would be up singing as well. On Saturday nights Marlene would be sharing what their win had been at the meat draw earlier that day; and that would dictate the meal for Sunday dinner. Many evenings were spent playing Rumoli; with Marlene often the dealer, and she was quick to notice if anyone was playing a card out of order.
Marlene and Jim would frequently go to Sal's for burgers, and Marlene would often take home a cake donut for a treat later on. Even only a few days before she passed, she had remarked how much she would like a burger or to go to a barbecue. Marlene enjoyed attending Weldon and Stella's dance performances and Shea's baseball games. Marlene had a deep love for animals. As a child, she had a dog named Buttons and she would frequently reminisce about how much Buttons loved ice cream. She had several cats over the years, all of whom she loved dearly, and she would share stories about the cats' adventures.
Marlene also enjoyed entertaining, whether it was outside in her backyard or in her cozy living room. There wasn't much that would embarrass Marlene, she would speak her mind, make jokes and had many friends. She was always ready to have her photo taken, never hiding or shying away from the camera, she liked having photos to commemorate an event, big or small.
The family would like to express their thanks for the care and compassion Marlene received over the last several months at Seven Oaks General Hospital, as well as during the last couple of months at Tuxedo Villa, and most recently to the staff in Emergency and SICU at Health Sciences Centre.
Mom, Grandma, Marlene, we feel so grateful to have had you in our life; although our time together was too short. We are thankful for the all the love and beautiful memories you have given us to hold onto forever.
A Celebration of Life for Marlene will be held on Thursday, June 30 at the Rockwood Army Navy, 341 Wilton Street from 11:30 a.m. until 3:00 p.m.
In lieu of flowers, please send a donation in Marlene's name to the Winnipeg Humane Society.