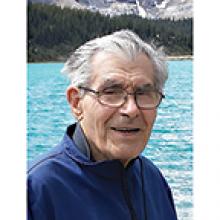 
It is with heavy hearts that we announce the passing of our beloved father and Opa.
He will be lovingly remembered and deeply missed by his son Mark (Brenda), his stepson Harvey (Raquel), his stepdaughter Marlene, his grandchildren, Ryan, Cody, Jessica, Trisa, Michael, Chris and Yvonne, his relatives and his many friends. Dad was predeceased by his first wife Ilse (1977), second wife Anni (2012), three sisters, Hilde, Liesel, Lotte and two brothers, Wilhelm and Kurt.
Dad was born in Karlsruhe, Germany on October 19, 1923 to August and Pauline Erb. He attended school in Karlsruhe and successfully attained his journeyman papers as a machinist.
Dad met Ilse in Karlsruhe and they married on December 1, 1951. Dad then travelled to Canada first, arriving in Halifax on Christmas Eve and later in Winnipeg. Ilse arrived four months later to join Dad in Winnipeg where he started his career as a machinist at CN Rail. Together they built their house and raised two sons, Mark and Ralph, and built many lifelong friendships. Sadly, Ilse passed away in February 1977.
Dad met Anni in Winnipeg and they married in Winnipeg April 22, 1978. Dad lovingly welcomed the addition of Harvey and Marlene into the family. Dad and Anni also built many friendships and loved their grandchildren as they grew up. Sorrowfully Anni passed away in January 2012.
Dad lived a full life and shared it with two wonderful women. Unfortunately, Dad's health started to decline in the last year, and he needed to move out of his house of 60 years into assisted living and eventually personal care. Despite his failing health and frequent hospitalizations Dad kept a positive outlook and never complained of his condition, literally to the end, when he peacefully passed away, with his family at his side.
We would like to thank Pastor Harald for providing spiritual care to Dad and for supporting us during this difficult time. Thank you to the staff at River Ridge for taking care of Dad during his stay there and to the Bethania staff for their compassionate care during Dad's final weeks there.
Funeral services will be held Monday, June 27, 2022, 11:00 a.m. at Holy Cross Lutheran Church, 708 McCalman Ave., followed by committal at Transcona Cemetery, 5014 Dugald Rd.
In lieu of flowers, donations may be made in memory of Paul to Holy Cross Lutheran Church.