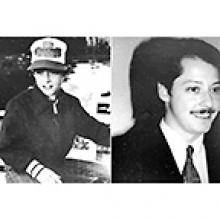 
It is with profound sadness we announce that on Thursday, January 13, 2022, Richard passed away peacefully at home at the age of 50 years.
Richard was born February 3, 1971 along with his twin Dianne Lynne Haines in St. Boniface Hospital to Victor St. Germain and Eleanor (née Schwabe). Richard was predeceased by his mother Eleanor in May 2013, his maternal grandparents, Alfred Schwabe and Lillian (née Stevens), his paternal grandparents, Frédéric St. Germain and Céleste (née Chartier), along with his aunts/uncles, Suzanne and her husband Maurice Prince, Marie-Jeanne and her son Donald St. Germain, Pierrette (Penny) Doucet, and Donald Hunter. He is survived by his sisters, Lauri St. Germain and Dianne Haines (Malcolm), his nieces, Megan and Daria, his aunt Yvonne Hunter and numerous cousins.
From the moment Richard arrived in this world, he always had a loving heart and generous spirit - with a dash of mischief tossed in for good measure. His employment history began with Canada Safeway, Tourism Winnipeg and Credit Union Central. Eventually, he landed at UniJet Industrial Pipe Services in 1998 and became their #1 Camera Operator (that's what it said on the side of his van anyway). Richard loved his job and was proud of the fact he'd literally worked on every sewer line in Winnipeg at least once, if not twice. His amazing memory allowed him to recall all the details should the City of Winnipeg or UniJet need that info. His interests were varied but if it went fast and was dangerous, he probably did it at least once - twice if he liked it. His Mustang was well-known in the Park, and he had VIP status at multiple establishments where he loved playing pool. Like his dad, Richard excelled at auto and home repair, adored the outdoors year-round and loved many music genres and attending concerts. The moment the Kansas Speedway was built, Richard had season tickets. He also loved to cook and if you scored an invite you were never disappointed.
A joint Celebration of Life for Richard and his father Victor will be held on Sunday, June 26 at 1:00 p.m. at the family home. For details please contact family members.