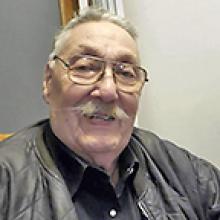 
It is with heavy hearts we announce the passing of Alvin Wesley Flett Sr. on June 17, 2022, with his children by his side, at the age of 89 years.
He was predeceased by his wife Louise; son Donald Flett Sr. and grandson Michael Flett. He is survived by his children, Alvin Flett Jr., Brenda (Pat) Flett, Jim (Marilyn) Flett, Evelyn (Andy) Flett, Kenneth (Kim) Flett, and Violet Flett; daughter-in-law Mary Jane; and son-in-law Anthony Pfeifer; along with numerous nieces, nephews, cousins, grandchildren, and great-grandchildren.
Alvin loved his many late-night rides through the city with his son Ken where they would count the number of deer they would see. He had many countless stories of his hunting days. He would tell you a story for every deer he would see, with his coffee in one hand and cigarette in another. He loved his grandchildren. Every one of them put a smile on his face and when his great-grandchildren were around was when he really lit up. You could catch Alvin every Saturday in his kitchen with his TV full blast while playing his many Kinsmen jackpot cards with his cat Patches next to him. Alvin always had ice cream or popsicles in his freezer for any grandkid that wanted. He had a spot for all his grandkids, but his grandsons, Cory and Cody could always talk about cars and toys with him. During the weeknight, you could find Jeremiah, Sadie, and Sabrina in his yard filling his bird feeders and taking care of yard work for him. Everyone would know grandpa was coming for dinner because his special spot at the dinner table would be empty and his plate was on the counter waiting for him to arrive. Alvin also loved to talk and tell stories of how he helped build our city with the masonry work he did and with the many companies he got to share his talent with.
Alvin will be missed in our family. Heaven has gained another angel