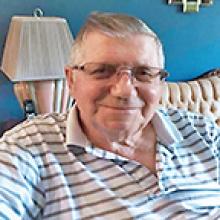 
At the age of 81, Fernand (aka: Fern) Dupasquier passed away peacefully at home from pancreatic cancer on October 3, 2020 with his loving wife Lorraine and sister Annette by his side in Winnipeg, Manitoba.
Born on September 16, 1939. Fernand was the eldest child of parents, Joachim and Yvonne (Mary) Dupasquier. Fernand was born in Notre Dame de Lourdes, Manitoba. For several years, Fern owned and operated the "Shell Service Station" in Lourdes. In 1970, Fern and family moved to Richer, Manitoba where they owned / operated the "Texaco Service Station/Restaurant." A few years later, they moved to Winnipeg where Fernand took up the trade of painting. He enjoyed over 28 years as a painter tradesman with the Saint Boniface School Division.
Following retirement in 2001, Fern was more active in curling, golfing and being the first one into the gym at the YMCA every morning. He and Lorraine loved to travel and their adventures would take them throughout Canada as well as to Europe, Indonesia, Australia, Mexico, Hawaii and many US states. Fern provided sound advice when required and would always offer a helping hand to anyone who needed it.
He leaves to mourn his deeply loved family. His wife of 55 years, Lorraine; his four children, Donald (Joanne), Denis (Kim), Guy (Wendy) and Shelley (Steve) and his grandchildren, Cadin, DJ (Rodelyn), Nicholas (Alaura), Jamie (Shawn), Victoria, Brooklyn, Jonah, Willow, Luca, Benoit, Marguerite, Léonce, Kingsley and his only great-grandchild, Magnolia. Benoit and Fern have the extra special bond of sharing a birthday on September 16.
Left to cherish his memories are his two sisters, Annette (Georges) Desrochers and Liliane (Robert) Pilotte. Fern was predeceased by his father Joachim (1996); mother Yvonne (2013); brothers, Louis (1978) and Hubert (2003).
Due to COVID, a funeral mass for Fernand will be held at 12:30 p.m. on July 6, 2022 at Saints Martyrs Canadiens Church, 289 Dussault Avenue. Eulogy and video followed by mass at 1:00 p.m. Refreshments and catering will be provided in the hall following the funeral. A private service at Glen Lawn cemetery will take place after the catering. Masks are strongly recommended.
For those unable to attend, the funeral service will be live streamed at: Saints Martyrs Canadiens Live Stream - YouTube
La famille Dupasquier tient à exprimer ses sincères remerciements au personnel de l'hôpital Saint-Boniface et est très reconnaissante pour leurs précieux soins palliatifs prodigués à domicile ainsi que leur support tout au long de cette épreuve.
In lieu of flowers, if friends so desire, donations in memory of Fernand may be made to the CancerCare Manitoba Foundation.