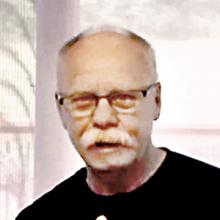 Brian passed after a long, hard-fought battle with cancer.
He is survived by his brothers, George, Johnny, and Richard (Melody), sister Joy, and many nieces and nephews. He was predeceased by his parents, Arthur and Margaret, sister Susan, brothers, Jimmy and Billy. Brian is also survived by his Boilermaker Brothers from Local 555, his friends, Curt (Jo-Ann), Derek (Cindy), Geoff (Cheryl), Brad (Danita), Duncan (Jan) and many friends in Selkirk and Winnipeg.
At the age of 18 Brian left school and got a job at Mandak Metal Processors, was laid off after a year then went to work at the Manitoba Rolling Mills for two years before finding his career path with the International Brotherhood of Boilermakers.
He was a Boilermaker for over 40 years travelling from Coast to Coast and forging many lifelong friendships during his career. He excelled at being one of Triple Nickels best welders and was a proud Brother.
In 2016 Brian was diagnosed with Asbestosis and quickly retired from work. After retiring he finally bought his Harley Davidson that he'd been talking about since his 20s. If it was a sunny day Brian would be out on his bike visiting friends or taking a cruise down some highway in search of a new restaurant for lunch, he loved being in the wind riding his Harley.
Brian was 'Uncle Brian' to his friends' kids, and he was a special Uncle to his nieces and nephews. He spent a lot of time with his nephews, Lee and Regan and their families. Some of the memories that Brian cherished recently was a trip when he went to Texas with Lee to take his cutter horses to be bred. He often spoke of the farm Lee had and how much he loved being there riding horses. This past Christmas was great for Brian, he drove to Lee's in some pretty dicey driving weather and thoroughly enjoyed the family togetherness having a great big Christmas morning breakfast, going target practice shooting with Lee and Little Jimmy at the new house, and then coming back to the big Christmas dinner.
During a Shut Down in Estevan, Saskatchewan, Brian had T-shirts and stickers made with "It ain't over until the Damage is Done"! Ride in the Wind, and Rest Easy Brother Brian, the Damage is Done.....
A memorial service will be held on Tuesday, July 12, 2022 in the Gilbart Funeral Chapel, Selkirk, MB, at 1:00 p.m. The service will be livestreamed via the link in his obituary at www.gilbartfuneralhome.com