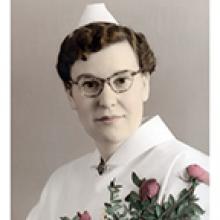 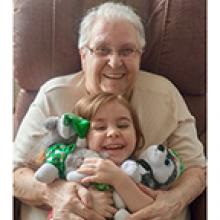 
After almost 90 years of loving and being loved as the family's rock and cornerstone, Mom has left us. The last six months of her life were difficult, with innumerable health challenges. As much as we miss her, we take comfort in knowing that she has now found peace and comfort.
She is survived by daughter and son-in-law Dawn and Ian MacLean; daughter and son-in-law Heather and Tim Demetrioff; son-in-law Peter Kusy; grandson and granddaughter-in-law Cameron MacLean and Anna Pauls and great-grandsons, Wilder and Casper MacLean. Mom also leaves behind her dear friends, Joan Wilkie, whom she first met in the first grade and Joan McIntyre, a friend of some 50 years.
She was predeceased by her daughter Sharon Shepherd and husband David Shepherd.
Our mother was known by different names to different people. To family, she was always Peg, Mom or Grandma Peg, while schoolmates and colleagues knew her as Una. It was only in recent years, as she became more involved in the health care system as a patient, that her legal name, Margaret, started to be used. But whatever they called her, people that knew our mother used the same types of words to describe her: kind, pleasant and wonderful.
Mom was born in Winnipeg, the second child of Percy and Ivy Johnson. Her early years were divided between the family home in St. James and the cottage at Winnipeg Beach, where she loved nothing more than riding the waves of that inland sea on a stormy day. Following high school graduation, she entered the nursing program at the Winnipeg General Hospital, graduating as a proud member of the class of 1954. Until COVID-19 put a hold on in-person gatherings, annual class reunions were a highlight of Mom's social calendar.
Shortly after graduation, she met our father, married and gave birth to the first of three daughters. This new family then moved to Spearhill, near Dad's family's farm in the Interlake, set upon becoming cattle ranchers. Mom thought that her medical training could be put to good use on the farm. What she discovered is that it would in fact be expanded, as she learned that a feet-first presentation is normal and not breech when a calf is born, and that cowhide is a lot tougher to inject than human skin.
Two more daughters and a devastating drought later, the family returned to Winnipeg, where Mom took a job nursing at what was then the Deer Lodge Veterans Hospital. When the family returned to a country home near Matlock, she started working at Hunter Memorial Hospital in Teulon and then Red River Place Nursing Home in Selkirk, from where she retired in 1997. A few years later, Mom returned to Winnipeg one more time, where she lived independently until a heart attack this past Christmas Eve, precipitated a downward spiral from which she never fully recovered.
Mom endured a great deal of physical pain in recent years, but her kindness, optimism and good humour never flagged. Her smile could light up a room, especially when she caught sight of her grandson or great-grandsons and she had a giggle more like that of a nine year old than a 90 year-old. Her compassion for others also remained a defining trait. She never failed to ask how you were doing, and she would tell you if she didn't believe your answer. She always had a sympathetic ear and some sound advice, whether for her daughters, their friends, or the healthcare workers that supported her at home. As a voracious reader with a keen intellect, the impact of failing eyesight on her ability to read was one of her greatest disappointments, but until the end, she stayed abreast of local and world news and was always happy to discuss current events.
The family would like to extend their sincere thanks to the staff of the various healthcare facilities that supported Mom these past six months: Grace Hospital, St. Boniface Hospital, Misericordia Health Centre and Weinberg 1 at the Saul and Claribel Simkin Centre, her home since mid-April. A special thank you goes out to the home care aides and nurses that supported Mom in various capacities for the past decade. Without your help, she could not have retained her independence nor her quality of life for as long as she did.
In accordance with Mom's wishes, cremation has taken place and there will be no formal service.
In lieu of flowers, those wishing to honour her memory are encouraged to make a donation to any of the facilities named above, to a program that provides scholarships or bursaries for nursing or other healthcare students, or to a charity of your choice.


Condolences for the family may be left at www.alternacremation.ca