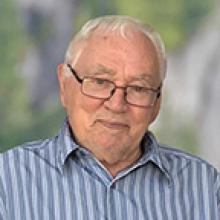 
It is with great sadness that we announce the passing of John Sessan. John was born October 12, 1940 in Krndija, Croatia. He immigrated to Canada in 1950 and met the love of his life, Marilyn, in 1963.
John was predeceased by his wife Marilyn (2017), father Adam (1988), mother Christine (2006), and sisters, Theresa (2012) and Chris (1986) and brother-in-law Paul (2002).
Left to mourn are his three sons, John (Pamela), Randy, Ken, one granddaughter Kyana, two sisters, Mary Goodmanson (Grant) and Linda Marchinko (Wayne), brother-in-law Steve Keicher and many nieces, nephews, aunts, uncles and cousins.
John was a proud member of the St. Josephs Roman Catholic Church, where he volunteered helping at Bingo and during Folklorama with the Majestic Alps Pavilion. For many years and was an active member of the Kolping Society for over 30 years.
John had a successful career at the Winnipeg Tribune and then he started a new career at the City of Winnipeg until his retirement in 1996.
John enjoyed his summer months at the family cabin in Hausa, Manitoba. He, along with Marilyn, also enjoyed hosting the endless family members or friends of the family at their home in West Kildonan. Above all, John was very proud of his family and granddaughter.
John was born in Krndija, a small village in Croatia. In 1944 along with his mother, two older sisters and a few aunts and cousins they escaped as the war was brewing. After many years of travelling and hiding they finally crossed the border into Austria in 1948. A couple years later they finally arrived in Winnipeg in 1950.
With his father still back in Yugoslavia fighting the war, John took on the role as the protector. During the travelling war years, he was the one sent into farmers fields to find food as they were trying to escape the war. Being the youngest and a boy he was sent in, as the punishment if caught would be much less than it would have been for his sisters. That was the start of John being the protector of his sisters.
John was one of the best sons that any mother could ever ask for. After his father passed in 1988 and his mother was now living on her own, a day did not pass that John didn't stop by for a visit with his mother. He would call that he was coming for a quick cup of coffee which was never a quick one!
Funeral services will be held at Glen Eden Funeral Home, 4477 Main Street, on Wednesday, July 6 at 10:00 a.m. A reception will follow at the Red River Community Centre, 293 Murray Avenue, corner of Main and Murray, one block north of the Chief Peguis Bridge. All are welcome to attend.


Family and friends may sign a Book of Condolence at www.glenedenmemorial.ca
Glen Eden Funeral Home
204-338-7111