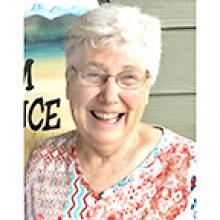 
We will cherish our memories of Mary, whose welcoming smile never failed to warm up the room. Her kindness, wisdom and empathy touched many lives during her 90 plus years. We are grateful that she so willingly shared herself with us all, inspiring all who knew her to see the world in a different light.
Mary served as a teacher, wife, farmer, mother, leader and minister. She was also a friend who could listen without judgment and a formidable advocate for what is fair and just.
Born July 5, 1931, Mary was the second of four children raised by Lila (nee Guest) and Bill (William) Elliot. She grew up on the Elliot family dairy farm near Stonewall, Manitoba with siblings Jean, Harry and Margaret.
She contracted polio as a teenager, which permanently compromised the muscles in her left arm. But, aside from making swimming in a straight line a bit of a challenge, there is no evidence to suggest that it handicapped her from doing anything she set out to do in life.
Mary attended teachers' college, after which she accepted her first position at Lone Star School in the Sperling area. That's where she met her partner in life, Leonard, a young farmer and older brother to four of her students. They married in 1952 and spent 69 jam packed years together before he passed almost a year to the day ahead of her.
Mary loved children and those of us at the family's core, Lyle (Jane), Darrell (Allyson), Laura (Gord) and Shelley (Dino) learned from an early age that family is not defined by birth. We were family to many over the years. John, David, Stephanie, Nina, Peggy, Geraldine, Corrine and Keith have a special place in our memories and hearts.
Mary was predeceased by her sister Jean Kitching; brother-in-law Jim Kitching, sister-in-law Thema Shields, brother-in-law Alex Shields, brother-in-law Jerry Winters (May) and sister-in-law Ivy Rance (Cliff).
She is survived by her siblings, Harry Elliot (Bonnie), Marg Bond (George) and Leonard's siblings, Cliff Rance, Vic Rance (Betty), Owen Rance (Barb), May Winters and Allan Rance (Brenda).
She is also survived by her children and grandchildren, Summer, Amanda, Kevin, Brian, Erica, Travis, Lexi, Kathlyn, Matthew, Taran, Ethan, Symara, Mya and Kaleb; great-grandchildren, nieces and nephews, each of whom she has enjoyed getting to know as they grow.
The farm Mary and Leonard operated together for 40 years was a sanctuary for whoever needed one. It was a place of safety and nurturing, whether that was expressed through a healthy bowl of soup or an empathetic ear. It was also a place of learning for international agricultural exchange students or non-farmers wishing to understand what farming is all about.
Her faith was a guiding beacon for how she lived. The church community was essential to our parent's lives, one they sought out no matter where their travels took them. And their travels took them afar.
Driven by Mary's spirit of adventure, they expanded their travel beyond camping trips in Canada and the US. The highlights included trips to Ethiopia and Eritrea on a study tour with the Canadian Foodgrains Bank, a study tour to Cuba, visits to the UK, Europe and New Zealand, small-ship cruises with famous authors, road trips in their camper van south to Mexico and north to Alaska and in their later years, multiple cruises.
Mary actively participated in the regional and national church communities, where she took on several leadership roles. She was elected chair of what was then known as Manitoba-Northwestern Conference of the United Church of Canada, served on national committees of the church and co-chaired the board of directors of the Canadian Foodgrains Bank.
She later followed her heart into lay ministry studies at the University of Winnipeg and congregations located throughout rural Manitoba called her to serve. With Leonard as her companion and driver, they made lasting friendships wherever they went.
When they retired from farming in 1993, Mary and Leonard moved to Wawota, Saskatchewan, where they spent four years serving the United Church congregation. They retired - for real this time in 1997 to Sperling, where they enjoyed another 16 years before moving to Carman in 2013.
As we sat with her during her last days, our family wondered many times why her heart kept beating long after her will to live had been sapped by pain and weariness. In hindsight, however, we realize that her heart has always been larger than life.
The family is grateful to Dr. Tyler Atchison, the nursing and support staff of Carman Hospital for the care and kindness they showed her during her stay in the palliative care unit.
Donations in her memory to the Carman United Church, Canadian Foodgrains Bank, the Palliative Care unit for Carman Hospital or another charity of your choice would be gratefully accepted.
Mary's life will be celebrated at 2:00 p.m. on July 16 at Carman United Church. All are welcome to attend. Masks are recommended, but not required.