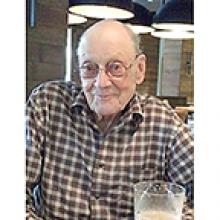 
Peacefully, John (affectionately known to many as Captain Jack) left us just short of his 103rd birthday.
He was predeceased by his wife Muriel in 2017 after 71 years of marriage. Together they created many memories spending their summers in the Whiteshell boating and fishing with family and friends.
After more than 30 years at the T. Eaton Co. he retired at age 62. He filled his retirement years travelling, golfing, and curling. He earned a lifetime membership to the Lorette Golf Course and finally gave up his golf cart at 95. He was featured as the CTV sports star of the week for curling at Fort Garry CC at age 96.
He is survived by his daughters, Wendy (Colin), Jennifer, Jan (Barrie); grandchildren, Kris (Sarah), Jillian, Chelsea (Mike), Bryan (Laura), Andrew (Magda), Christian and Brendan. He also leaves behind his great-grandchildren, Jaden, Luna, Noah, Alice, Kaia, and many nieces and nephews and their families.
Jack proudly hung his letters congratulating him on his 100th birthday from the Queen and honouring his service to his country from the Minister of Veterans Affairs. He will be fondly remembered for his storytelling, love of cars and especially his quick wit, honesty and integrity.
In lieu of flowers, donations may be made to Veterans Affairs Canada.


Friends and family are invited to visit John's memorial page at interlakecremation.ca, where memories and condolences may be shared.