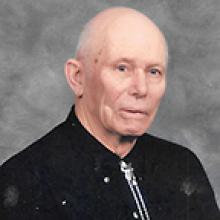 It is with great sadness that we announce the peaceful passing of our beloved father, grandfather, great-grandfather and uncle on Saturday, June 11, 2022. Danny passed away at the age of 94 at the Grace Hospital in Winnipeg, MB.

He will be lovingly remembered by his children, Hal (Lil), Brian (Diane), Merle and Heather; grandchildren, Tristan (Nicole), Chelsea (Elliott), Michelle (Denis), Samantha (Jared), David (Ashlee), Jessica (Dennis) and Cassidy (Christopher); great-grandchildren Logan, Bentley, Tessa, Emily, Ethan, Austin Luke and Esme, as well as his ninth great-grandchild to arrive in August; step grandchildren, Scott (Cherrie), Shannon (Harold) and step great-grandson Jacob. He is also survived by his sister-in-law Kay Watson as well as numerous nieces, nephews and friends.
Danny was predeceased by his wife Margaret, of 63 years, son Edward, parents, Margaret and Godfrey; mother and father-in-law, Harry and Ivy Bennett; sisters, Helen (Victor) Goertzen and Marion (Roy) Gering; brothers and sisters-in-law, Harold (Doris) and Cal (Dorothy) Bennett.
Danny was born on August 6, 1927 in Treherne, MB and attended school in Roseisle, MB but left before graduation to go to work. He farmed with his father and worked in southern Manitoba farming and trucking. He moved with his parents to Eriksdale in April 1946. He then started his career with Manitoba Telephone System in 1948 until 1960.
Danny married Margaret Bennett on August 6, 1955. After their marriage, Danny took over his father's dairy farm but continued to work for MTS. Together they worked and raised five children on the family dairy operation. Danny began supplying milk to the Eriksdale Creamery and then purchased bottling equipment and supplied milk to the stores in Eriksdale. He also delivered milk house-to-house in Lundar for a year before purchasing a milk quota in December 1965 and began shipping fluid milk to Winnipeg. Dan retired in 1992 when the dairy farm was purchased by Brian and Edward. Danny had a long involvement in the dairy business as he delivered milk in a hand wagon as a child in Roseisle.
Danny was always actively involved in the community. He was a councillor for the RM of Eriksdale from 1964 to 1970. He served on the Eriksdale Co-op board of directors for 14 years. He was a 4-H leader for five years, a director of the Lundar Ag. Society, a volunteer driver for the Handi-Van, as well as the president of the Eriksdale New Horizons.
In 94 years Danny never lost his love for horses. After retiring from the dairy farm Danny and Margaret spent many weekends attending harness racing events. He also spent many hours working on his new hobby of doing scroll work. When he wasn't working on his new hobby or attending harness races or horse shows he spent countless hours reading. Dad loved dancing and listening to music. He enjoyed many Sunday's attending old time dances with Margaret, and they would usually be joined by a couple of grandchildren! Family gatherings were always very special for Dad, especially seeing the grandchildren and great-grandchildren. They were his pride and joy and he cherished each of them.
As per Danny's wishes, cremation has taken place and a memorial service will be held at 1:00 p.m. on Friday, July 15, 2022 at the Eriksdale Recreation Centre with Reverend Melanie Kauppila officiating. Interment will take place at the Eriksdale Municipal Cemetery, with a luncheon to follow.
In lieu of flowers, donations may be made in Danny's memory to a charity of your choice.
The family would like to extend their heartfelt thanks to the doctors and nursing staff of the Grace Hospital. Also special thanks to John and Karen Gray for their care and compassion.