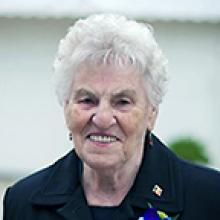 
With family by her side, Angèle Fransoo passed away peacefully at Foyer Valade Nursing Home on Tuesday, July 5, 2022.
Angèle was predeceased by her loving husband Gerard Fransoo; parents, Oscar and Martha (née Van de Kerkhove), stepfather Louis DePessemier; brothers, Frank and René; sister Rachael, and grandson Paul.
She is survived by her siblings, Caesar, Regina, and Laurence. She was adored by her family of six children: Ron (Agnes), Bev (Bill), Ken (Jo-Anne), Karen (Robert), Briant (Linda), and Randy (Alison); grandchildren, Rodney (Fran), Cathy (Peter), Kathryn (Allen), Roxanne (Lavern), Michelle (Tim), Phil (Francine), Nicole (Rowan), Melanie (Andrew), Jenny (Ian), Eric, Stephanie (Andrès), Patricia (Damir), Jeff (Rachel), Patrick (Sydney), Pauline (Mathew), Chris (Bernice), Julien, Benjamin, Mario, William, Corinne; great-grandchildren, Megan, Andrew, Derek, Hasana, Kane, Odin, Shanti, Levi, Lillianna, Macy, Olive, Jaxon, Henri, Logan, Eva, Nina, Jack, Harrison, and Mateo.
Angèle was born in Somerset, Manitoba and raised on the family farm with her four brothers and two sisters. She spoke often about milking the cows before going to school in the morning. As a teen she drove a truck to deliver milk, a job usually reserved for men.
She met Jerry Fransoo at The Belgian Club just after the Second World War. Her friends paid her $1.00 to go up to a handsome soldier and say "Hello Spitz!" In those days a girl wasn't supposed to initiate a conversation with a boy, but she wanted the money! She often says that it was the best money she'd ever earned. They were married in 1953 and had six children, celebrating 54 years of marriage before Jerry passed away in 2007.
Angèle and Jerry had a large but tight circle of friends and they got together often to play cards, bowl, and dance. She taught many of her grandchildren how to play the card game Bien. She could polka anywhere, anytime, with or without music. She also knew almost everyone. You could strike up a conversation with a stranger at a bus stop and inevitably they would know Angèle. She was universally loved.
In the early 1960s, Angèle and Jerry 'splurged' and bought a cottage at Twin Lakes Beach. It became a hub for their family and friends. Her fudge was so legendary that many (not just her grandchildren) called her Grandma Fudge.
She was the heart and soul of The Belgian Club, especially during Folklorama, as one of the only patrons who still spoke Flemish.
Angèle died peacefully on Tuesday, July 5 with family by her side. A Celebration of Life will be held at 11:00 a.m. on Monday, July 11 at Holy Family Church, 778 Archibald St, Winnipeg, with viewing one hour prior. Reception and lunch at The Belgian Club following the service.
The family appreciates the sympathy and support from friends, and is grateful to the staff at Cathedrale Manor and Foyer Valade who provided such thoughtful and loving care.
In lieu of flowers, please send donations to The Belgian Club, 407 Provencher Blvd, R2H 0G9.