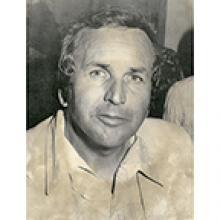 
Raymond Joseph Allard passed away quietly on July 6, 2022, with Pauline, his loving wife of 74 years, and son David by his side.
He is survived by his children -- Marilyn (James) Boughen, George (Carol deceased) and friend Cheryl of Onanole, MB, Daniel (Kathleen) of West Vancouver, BC and David (Adrienne) of Kelowna, BC and his sister Lucille Heney of Pembroke, ON, along with grandchildren, Paula, Naomi, Katie, Benjamin, Peter, Paul, Matthew, Adrianna, Jordan, and Camryn and six great-grandchildren.
He was predeceased by his brothers and sisters, George, Blanche McCorquodale, Renee Clark, Lawrence, Paul, and Allan ("Babe").
Raymond was born on March 30, 1925 in Sainte-Rose du Lac, Manitoba to Joseph and Irene (Hamelin), the second of eight children. In 1929, his father moved the family to Dauphin as the owner of the Ford automobile dealership. Raymond was mostly educated in Dauphin and finished school at St. Paul's High School in Winnipeg.
In 1943 he enlisted in the Royal Canadian Air Force, acquiring his pilot's wings and a bombardier rating. After the war, he enrolled in the University of Manitoba, graduating in 1950 with a degree in Mechanical Engineering.
At university he met Pauline, a Home Economics student from Underhill, Manitoba and were married in 1948 at St. Ignatius Church, Winnipeg. Ray and Pauline lived an exceptionally full life, raising their family in Dauphin. Summers were spent between Lake Dauphin, Clear Lake and various camps on Lake Winnipegosis and Lake Manitoba, including his father's Camp Redhead where, each summer, the extended Allard family would gather. They also travelled extensively to Europe, Arizona, Australia and Mexico with a ski trip to the Rockies thrown in most years. In 1984, Pauline and Raymond moved to Kelowna and spent 29 active years in BC. His final years were restful days at the Parkway Retirement Community in Winnipeg.
Raymond's first career job was with General Motors in London, Ontario introducing Canadian railroaders to the diesel-locomotive. He and Pauline, with toddler Marilyn, moved back to Dauphin in 1953 to take over his father's automobile dealership. Raymond and his brothers, Paul and Lawrence, managed Allard Motors until it was sold in 1984. After the sale of the dealership, Raymond secured the tennis concession at Wasagaming in Riding Mountain National Park. It was the center of his summer social life for 10 years.
Raymond was a sportsman - he was a hockey player (Portage Terriers Junior team 1942), hunter, curler, sailor, snow skier, golfer, tennis player and bridge player. He was also a storyteller, liking nothing better than starting a conversation with someone, finding a connection, and then engaging in a good-humoured conversation about the war, sports, or life in general.
He gave back a lot to his community. Raymond was a member of the Rotary Club of Dauphin. He served on various community boards, including many years as Chairman of the Dauphin Recreational Committee, President of the Dauphin Kings, and trustee of the Dauphin School Board. He is also remembered for many unsolicited acts of kindness in the community.
While we mourn the loss of our husband, father, grandfather and great-grandfather, he will be remembered with love and we celebrate his full and truly unique life.
In lieu of flowers, please make a donation to The Canadian Cancer Society or Dauphin Community Foundation.
A serice celebrating his life will be held on Friday, July 15 at 2:00 p.m. at Thomson "In the Park" Funeral Home, 1291 McGillivray Blvd., Winnipeg, MB. Raymond will be laid to rest at a later date in a service to be held in Dauphin.

Raymond Joseph Allard passed away quietly on July 6, 2022, with Pauline, his loving wife of 73 years, and son David by his side.
A service celebrating his life will be held on Friday, July 15 at 2:00 p.m. at Thomson "In the Park" Funeral Home, 1291 McGillivray Blvd., Winnipeg, MB. Raymond will be laid to rest at a later date in a service to be held in Dauphin.
A longer obituary to follow.

THOMSON "IN THE PARK"
204-925-1120
This obituary may also be viewed and
condolences may be sent to
www.thomsoninthepark.com