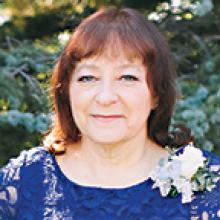 
Please join us on July 25, 2022 as we mourn the loss and celebrate the life of our beloved daughter, mother and grandmother, Heather Ferguson, who passed away on May 20, 2022. The service will be held at 11:30 a.m. at St. Mark's Anglican Church, 19 St. Mark's Place.
We will remember Heather for her gentle spirit, love of family and wide range of interests. Growing up in West Kildonan, Heather knew early in life that she wanted to work in a field where she could help others. This desire led to her 35-year career in social services with the Manitoba government, after earning her Bachelor of Social Work and Master of Science degrees at the University of Manitoba. She also became a devout member of St. Mark's Anglican Church, where her contributions included helping immigrants settle in Winnipeg.
Heather's greatest joy in life was her daughter Jillian, son-in-law Ian and three lively grandchildren. She cherished the weekends they spent together at her Lake Winnipeg cabin, which Heather built in anticipation of her retirement in 2017.
As Jillian became a young highland dancer, Heather became her constant cheerleader at recitals and competitions. She soon developed a love of all things Scottish - from Scottish country dancing and Robbie Burns dinners to trips to Scotland with her mom and Jillian in tow. She was also a perennial volunteer for Scottish heritage events, including Folklorama, the Selkirk Settlers' 200th anniversary celebrations and the Scottish Diaspora Tapestry project.
Heather is deeply missed by mother Kathleen Granger; daughter Jillian Drozda (Ian); and grandchildren, Jackson, Mason and Emerson. Also mourning her passing are her sisters, Linda Derlago and Gail Granger; and former spouse Wayne. She was predeceased by her father Frederick Granger, and brother-in-law Barry Derlago, as well as a series of very fortunate pets.


Condolences for Heather's family may be left at www.alternacremation.ca