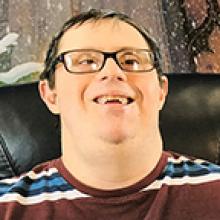 
It is with deep sadness that we announce the death of Normand Thuot. He passed away at his home in Winnipeg, Manitoba, on July 13, 2022 at the age of 53 years old.
Normand was predeceased by his mother Céline Thuot, father Raymond Thuot, Marc, (brother), Robert (brother) and Elsie Lorenz Thuot (stepmother).
He is survived by his brother Georges Thuot, sister-in-law Dolorès Deschênes, sister Diane Thuot-MacDonald, brother-in-law Douglas MacDonald. He will also be missed by his family at Abbotsford and Nova Vista home.
Normand was a very sociable and kind person. He loved spending time with his family and his friends. He had a strong faith and loved participating in the group Faith and Light. He also travelled to Europe and even had the chance to meet the Pope. He enjoyed singing, dancing, bowling, swimming and going to gatherings with friends. He made friends everywhere he went. He will be greatly missed but never forgotten.
We would like to thank all the staff at Abbotsford home, especially Caitlin Lima who went above and beyond for making sure Normand was comfortable, the palliative care nurses, and the members of Faith and Light.
Cremation has taken place and he will be laid to rest at a future date with a private service.
Donations may be made to St. Amant or CancerCare in Normand's memory.