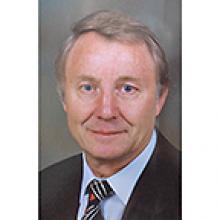 
The family of Henry Janzen announces his passing on July 20, 2022 at Deer Lodge Centre.
Henry will be lovingly remembered by his wife Judy; son Dean (Jennifer); their children, Ryan and Brad; daughter Joanne (Kelly Dobson); brothers, Walter (Agnes) and Rudy (Aila); as well as numerous other family members and friends.
He was predeceased by his father Jake; mother Sadie; twin brother Harry and younger brother Robert "Bobby" Janzen. The family would like to acknowledge the special friendships of Glen Martinson, Stan Unger, Dennis Hrycaiko and James Yamashita.
Henry was born in Winnipeg and remained active in the community throughout his life. He had a passion for sport and active living. He was a member of the Winnipeg Blue Bombers, being named Rookie of the Year (1959), Outstanding Canadian, as well as being named as a CFL All-Star. He is a member of the Winnipeg Blue Bomber Hall of Fame. Henry played professional football under the guidance of lifelong mentor Bud Grant. He expanded his professional career to the University of Manitoba. Here he coached the Manitoba Bison Football Team to the first ever back-to-back Canadian Intercollegiate Football Championships. He remained equally proud of this achievement and the extraordinary individuals on his teams.
He spent the majority of his professional career as the Dean of the Faculty of Kinesiology and Recreation Management at the University of Manitoba. With his leadership, the School of Physical Education was established as a Faculty. He was integral in the establishment of the Health, Leisure and Human Performance Research Institute and Recreation Studies. He was the Chair and Founding Board Member of MITT (Manitoba Institute of Trade and Technology), School Trustee Pembina Trails School Division for 24 years, Chair and member of the National Advisory Council Fitness and Amateur Sport for ten years, as well as many other community boards. He also gave long time service to The United Way, St. Boniface Hospital, Manitoba Boxing Commission, Northern Fly In Sport Camps, Provincial Council on Youth Crime and CHUM Radio.
Throughout his life he received many honours and accolades, including The Queen Elizabeth II Diamond Jubilee Medal, Order of the Buffalo Hunt -Achievement Award, Builder Award for Outstanding Dedication and Promotion of Physical Education for the Youth of Manitoba, Honorary Membership in The Manitoba Teacher's Society, Certificate of Recognition for Outstanding Service and Dedication to Pembina Trails School Division, Member of Manitoba Sports Hall of Fame, named as one of Five Outstanding Young Manitobans and Honorary Citizen of Winnipeg.
The family would like to thank Dr. Chantel Braun as well as the staff of Tower 6 Deer Lodge for their wonderful care and kindness.
A private family burial will be held.
In lieu of flowers, donations may be made to The Winnipeg Blue Bomber Alumni, 25-1010 Wilkes Avenue, Winnipeg, MB R3P 2S4 or a charity of your choice.