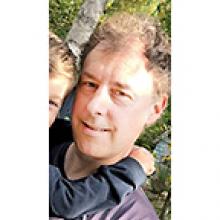 
It is with great sadness that the family of Stephen Dutcheshen announces his peaceful passing on June 29, 2022. After a short and sudden battle with cancer, Stephen passed surrounded by love and with family by his side.
Stephen is survived by his wife Angela Woodcock. He was a loving and playful father to David and Sarah Jean, proud son of Allen Dutcheshen and the late Carol (Wade) Dutcheshen, beloved brother of Karen (Dutcheshen) Roblin, and uncle to George and Julia Roblin and Nicholas and Mitchell White.
Stephen was born on July 11, 1966 in Winnipeg, and spent his youth with close friends, biking around River Heights, playing pick up sports and, especially, drawing. He received a Bachelor of Fine Arts from University of Manitoba in 1987, and continued his studies at Ontario College of Art and Design in Toronto. Stephen was a talented artist, and followed in his father's footsteps as an illustrator at the CBC, where he worked as an award-winning animator and art director in Toronto until his passing.
Stephen was loved for his kind, gentle disposition and understated sense of humour. He shared his artistic and musical gifts in many thoughtful ways. He will be sadly missed, and never forgotten by his family and friends.
A celebration of Stephen's life will be held Saturday, September 24 at the Sorauren Fieldhouse in Toronto at 2:00 p.m.