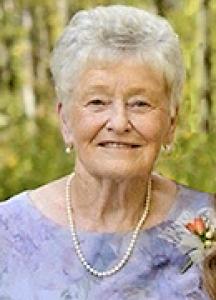 ENGLISH, Ruth Elizabeth (Beth) passed away peacefully at the Riverdale Health Centre on June 21, 2022. Beth was born on September 13, 1940, to parents Percival and Amy Harrison. Beth married F.F. Clair English of Bradwardine on February 7, 1959, and were married for over 63 years. She leaves to mourn her loving husband Clair, daughters Debbie English (Art), Eileen (Jim) Harrison, and son Brian (Leanne), English, and son-in-law Leonard (Beth) Gregoire, and grandchildren Christine English, Letitia Gregoire (James), Ryan Gregoire (Jen), Melissa (Jordan) Vollmer, Matthew Harrison (Natalie), Sean (Ellise) Harrison, Connor (Kyla) English and Brendan English (Haley), and three great-grandchildren. She was predeceased by her parents, Percival and Amy Harrison, brothers Albert and Frank Harrison, and daughter Patricia Gregoire. Beth was raised on the family farm in Oakner, Manitoba, where she attended school at the Oakner School, and finished her grade 12 at Hamiota, Manitoba. She started her teaching career in 1961. She taught violin, viola and voice for 60 years. Beth loved playing and teaching both classical and Old Time music. She was a member of the Rivers and the Brandon Community Orchestras. She was the conductor for the Rivers St. James Anglican Junior choir, as well as a member of the Kenton Kentones Barber Shop. She, along with Clair formed a band with two friends called the Friendly Four. They were able to play for many dances, anniversaries and at many personal care homes throughout Western Manitoba. Beth had adjudicated violin and rhythm bands at festivals in southern Manitoba and in later years, judged at fiddling competitions throughout Western Manitoba and Eastern Saskatchewan. Beth was an avid curler and was very involved in Ladies, Mixed and then Senior leagues, as well as participating in many neighbouring community bonspiels throughout the years. She represented Manitoba six times at the Canadian Order of Forresters Dominion curling championship. Beth and Clair loved to dance and they even taught pattern dancing to other couples for many years at the Bradwardine Hall. Beth volunteered for many organizations throughout the years. That included the Lothair-Daly and the Riverdale Auxiliary, the Bradwardine Community Hall, Rivers Curling Club, Rolling River Festival of the Arts, the Winter Festival in the Scottish Pavilion, and the Shrine Ladies in Brandon. Her dedication to community and volunteering has been instilled in her children and her grandchildren. Beth was a hard worker. She milked cows, raised chickens, sold eggs, Watkins products and livestock mineral for years. She trucked many loads of grain at harvest time, as well as made all of the meals, until Clair bought Beth her very own combine. Beth loved her garden and flower beds. She spent hours caring for her flowers and vegetables, which gave her much pride to show to friends and visitors. She also enjoyed giving people bouquets of flowers, produce, jams and preservatives that she had prepared. She was an incredible cook, and all of her children loved their favorite dishes that she would prepare for them. Beth was fortunate to have travelled to many parts of the world. It wasn't the destination, but rather the people they would meet who stayed in contact with them years after meeting them. A celebration of Beth`s life will be held on Tuesday, August 2, at the Rivers United Church, at 11 am, with Sally Carter officiating. Interment will follow at Ancrum Cemetery. In lieu of flowers, donations in memory of Beth can be made to the Riverdale District Health Auxiliary, Box 360, Rivers, MB, R0K 1X0., or the CancerCare Manitoba Foundation. 675 McDermont Ave, Rm ON1160, Winnipeg, MB, R3E 9Z9.