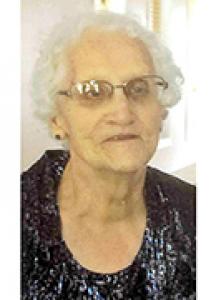 RUTTAN: Mrs. Elsie Ruttan formerly of Melita, passed away at Evergreen Place in Boissevain on Thursday, July 28, 2022 at the age of 97. Elsie was predeceased by her parents, Amos and Lillian Rawlinson; brothers, Albert, Bob, and Les Rawlinson; sisters, Lil Wyatt, Mae Whitwell, and Ruth Wilson; nieces, Sharlene, Darlene, and Ethel; nephews, Bill, Don, and Lyle. She is survived by her nieces, Linda (Gary) Maxwell, Ardith Wilson, and Mildred Shaw and their families plus other family members of those that have predeceased Elsie. Elsie was born and raised on the family farm near Melita. She attended school at West Brenda and Cardale. In 1945, Elsie met Doug Ruttan of Napanee, Ontario. They were married on November 19 of that same year in Melita and moved to Napanee. In the late 60's Elsie moved to Alberta where she met Ralph Sifton. Elsie and Ralph moved back to Melita in 1970. She worked in housekeeping at Melita Personal Care from 1977-1989 where she made many lifelong friends. Elsie and Ralph travelled extensively through the north visiting Alaska, Whitehorse, Inuvik, and Tuktoyaktuk on the Arctic Ocean. Ralph passed in 2004 and Elsie remained in their home until 2010 when she moved to the Melita Lodge. She was able to live there with excellent support from Home Care until the age of 97 when health concerns required her to move to Personal Care. The family would like to thank the Melita Home Care staff and the staff in Evergreen Place in Boissevain for the excellent care they provided Elsie. A funeral service will be held on Tuesday, August 9, 2022 at 3:00pm. from the Redpath Funeral Home Melita with Kurt Ardron Funeral MC. Interment to follow at the Melita Cemetery. Donations may be given to the Charity of your choice. Arrangements in care of Redpath Funeral Home Melita 522-3361. Neil Redpath & Kurt Ardron Funeral Directors.

To send condolences to the family, please visit: www.redpathfuneralhome.com