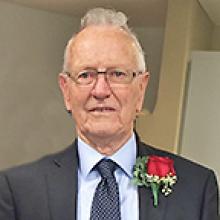 
Dad - we miss you incredibly but are very grateful to have been able to be together for so many special family times through the years which have given us many memories that we cherish.


A "Celebration of Life" will be held on Saturday, August 6, 2022 at 2:00 p.m. at Neil Bardal Funeral Home, 3030 Notre Dame Ave. Everyone attending must wear a mask for the duration of time they are in the building.
Should you desire to support something very dear to Dad's heart, the restoration project of Streetcar # 356 currently underway is something he really wanted to see through to completion. Donations to support that can be made to Heritage Winnipeg, 509-63 Albert St., Winnipeg, MB R3B 1G4. Dad also cared deeply about First Lutheran Church - donations to support it can be made to the church at 580 Victor St., Winnipeg, MB R3G 1R2.