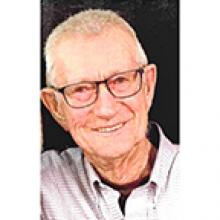 
Frank Arnold Anderson was born on August 22, 1935, the eldest child of George and Elizabeth Anderson (Lowe). He came home from the hospital to the family farm at Austin where he was fortunate to spend the first six years of his life with his live-in (paternal) grandmother who certainly helped to influence how he was raised and who he became even as a man. The house only got busier over the years with the addition of six younger siblings and lots of family and friends in and out.
Frank took his early schooling at Springbrook, about a mile down the road from home, and then went on to Austin. Frank was no stranger to work as he helped with the harvest each fall since he was about 12, until he finally left school at age 16 to go to work full time. He started out building military housing, first at Rivers, then joining his friends in Shilo to do the same, but for better pay. In about 1952 he decided that he wanted to see the country and started his adventures with hitchhiking around the western provinces, finding work in various places including zinc and gold mines. He returned home again to help on the farm during the winter months, or if work was slow out west. Frank said he hitched 6300 miles in five weeks one time, and always talked about how good the Salvation Army was to him over the years, as that was the first place he'd go for a bed and a meal. He enjoyed repaying those hitchhiking rides many times over through the years until long after it was considered safe to do so.
In about 1954 he got a "proper job" (his words) where he worked on the telegraph lines for a couple of years before he started working as a hoe and crane operator. He was involved in building many small bridges still in use today, in southern Ontario and Manitoba, in a fraction of the time they would be built today, and yet every bit as good. Many cherished friendships were formed during these years and continue until this day.
Frank married Yvonne Hanson in March of 1959 and often said it was the best decision of his life. They had four children; Trieste was born later that fall, Donna in 1961, Reid in 1964, and Leanne in 1969. In 1965, as their young children were starting school, they settled back "home" in Austin and started to farm. They moved to his uncle Glen's yard and he and his brother, Eric, formed a partnership which was to last many years. By about 1968 Frank was able to farm full time while Eric continued to work on northern construction jobs coming home in the down times to help. In 1972, Frank and Yvonne moved to the farm at Carberry, where they lived until they moved to town in 1988. It was during this time that Donna, Reid and Leanne all started to farm and Eric moved out on his own.
Frank enjoyed trying new things in agriculture and over the years dabbled in cow/calf operations and specialized breeds such as Charolais, Simmental, and Maine-Anjou. He then became quite famous for his Holstein Feeders, as he was one of the first to feed cattle with waste potatoes. He was also one of the first in the area to ship cattle to the States, once again forming numerous friendships in the business that he greatly valued always. Frank never ceased to share his love of farming, opinions, and expertise with anyone who would listen and wanted to learn.
Frank enjoyed travelling and he and Yvonne have logged many miles together just the two of them, but also with many good friends and family. They visited Australia (his favourite destination) and Holland, as well as Canada (coast to coast) and much of the US. They enjoyed taking in the countrysides via the scenic route and National Parks, and always made time for feedlots and auction marts, and of course, connecting with friends and family along the way.
He enjoyed guns and all that came with them, including reloading shells, target practices, gun shows and more, which he enjoyed sharing with friends and family. He loved vehicles and always drove in style, whether in a sparkling clean Range Rover, Jeep, or his classic go-to, a new red Ford truck.
From a young age, Frank was always interested in politics and greatly enjoyed a good debate over current world issues. He was a faithful conservative, as he always said they were "the best of the worst" option. He subscribed to numerous magazines and newspapers and never missed scouring an issue cover to cover, usually with a hot cup of coffee, hot iced tea, or a plain old cup of hot water. He could often be found down at the local coffee shop, whether in Carberry or Austin, for the latest local news too. In the last few years, especially, Frank and Yvonne frequented restaurants and diners numerous times a week, making friends out of the staff and other regulars. He loved giving advice to anyone who asked and a few who didn't. He firmly believed that people were good and if you treated people right they would treat you right in return. He, himself, was well liked and well respected in his communities.
Frank is lovingly remembered by his wife of 63 years, Yvonne, daughter Trieste (Ken), son Reid (Judy), and daughter Leanne (Ray); grandchildren, Jamie and Kyle, Whitney, Layne and Alexis, and Camille, Taren and Reece; great-grandchildren, Khylen and Keaton, and Mariama; siblings, Darwin and Lorraine Chant; son-in-law Peter, brother-in-law Alex (Carol); Aunt Raebelle, as well as nieces, nephews and extended family. He was predeceased by his daughter Donna, and siblings Lorne, Garth, Lynne and Eric.
A Celebration Of Life will be held on Monday, August 1, 2022 at 1:00 p.m. at the Austin Community Hall with Rev. Chris Evetts officiating.
If so desired, memorial donations may be made to CancerCare Manitoba.