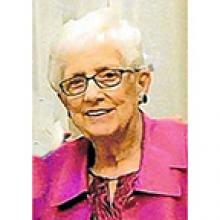 
Gail Burns (Marilyn Gail) was born in Winnipeg on February 23, 1934 to Leonard and Deane (nee St. Pierre) Doody. She would go on to many worldly pursuits and accomplishments, but creating a home was always central to her character and for almost all of her life that home was in Winnipeg.
She grew up in a home famous for its hospitality. That house still stands near St. Ignatius where she was baptized, sparkled in primary school, got married and said good-bye to so many that were close to her, including her parents and her husband and partner in life John Claude Burns.
She met John at the University of Manitoba. Degrees in hand they quickly made no small contribution to the baby boom, bringing seven kids into the world in nine years. The family grew and relocated several times as John's career progressed. There were illnesses, accidents, a lot of noise and unbearable car trips but the family always felt extremely fortunate in each other and grateful for what in retrospect were very happy, prosperous times. John and Gail shared a strong faith in Catholicism. They endured a lot of pushback from their kids on this but never wavered in their intent to instill a strong sense of social justice and fairness in their offspring.
Gail always showed there was a unique place in a generous heart to her family, for each of her many children and especially for her beloved grandchildren. We always had the love we wanted and, if the occasion warranted, the love we needed.
Gail will be remembered for countless acts of kindness and thoughtfulness shared with family and friends over the decades. They made us feel so welcome and special that we almost forget how she mastered the art of multi-tasking well before the term was invented. Gail was a scholarship student, well read, well-travelled, and an accomplished journalist and writer. She cooked or supervised the cooking of meals and desserts that were the envy of the neighbourhood, sewed, made preserves and kept up a healthy garden.
As soon as her own kids could walk to school she completed a B. Ed and became a popular and respected teacher at St. Mary's Academy in Winnipeg (where she was known as "Mother Burns.") and later at Loretto College School in Toronto. She was born to teach and loved these jobs. Colleagues remember her as exceptionally fun to be around. Not one to sit still, she was in demand as a columnist for the Catholic New Times and did a stint as religion editor at the Toronto Star. She had a keen ear for idiosyncratic names and phrases which she would share joyously with those around her and eventually a large readership.
In retirement she, yes, returned to Winnipeg and made yet another home that would instantly become a focal point in family life even more so now that children and grandchildren lived all over the continent. John died in early 2016, a loss that Gail met gracefully with acceptance and dignity, grateful for the memories they had built together, and supported by family and her wonderful circle of friends. In these latter years, she was tested over and over again by chronic health issues. These she confronted as conditions to be managed and adapted to, not a source of complaint. In her eighty-eighth year, she put the rest of us to shame by publishing a full-length fictional memoir, copies of which she triumphantly signed during her last hospital stay.
Left to cherish these gifts and memories are Gail's seven children and their spouses: Kevin (Christine Bankier), Nora (Jim Cristall), Tim (Cleone Grasham), Margaret (Scott MacKay), Michael, Paul (Rosslyn Berot) and Ken (Michelle Burns). Each of her 11 grandchildren, Sam Burns; Jack and Maddy Cristall; Maya, Lucy and Abby Grasham Burns; Justin, Amelia and Casey Berot-Burns; and Ceili and Jack Burns, can tell you a story about special visits with Grandma Gail.
Gail also loved and will be dearly missed by her little sister Patricia Goodin and her wonderful family. She was also close to John's sister Eleanor Burns and had a lifelong special companion in her cousin Marlene Coughlin. She was pre-deceased by her much-admired older brother Jack Doody (Anne-Marie Oppikofer).
Gail's family is incredibly grateful for the staff at the Boulton Residence, her wonderful home care support, and the excellent and compassionate care she received from the teams at Health Sciences ward GB--3 and Seven Oaks unit 4--11.
Gail's wonderful 88 years of life will be celebrated with a funeral mass at St. Ignatius Church, 255 Stafford Street, on Tuesday, August 2 at 11:00 a.m. The service will stream live at stignatius.ca. Flowers gratefully declined but those who wish to should make a donation to the charity of their choice. Friends are also encouraged to leave a note or memory of Gail at www.wojciksfuneralchapel.com