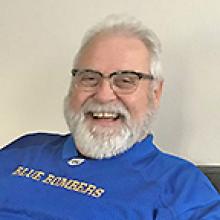 
Our much beloved husband and father died suddenly on August 4, 2022.
Gene is survived by his wife Jennifer, daughter Megan and future son-in-law Don McFaull (Connor and Carson), son David and daughter-in-law Jessica Hontz, sister Therese Kozak, brother Neil Antymis and sister-in-law Leslie, sister-in-law Alexis Antymis, and brother-in-law Allan Witzke, all of whom will miss him deeply. He was predeceased by his parents, Stephen and Pearl Antymis, sister Sharyn Witzke, brother Gerald Antymis, brother-in-law Peter Kozak, and parents-in-law, Ron and Lorna Sanders.
Gene was born on April 13, 1949, and lived his earliest years on the family farm in Thalberg, Manitoba. His parents instilled in their children the lasting values of family, faith and hard work. When the family moved to Beausejour Gene began attending the local school. Within days his new friends had nicknamed him "Smiley". Throughout his life Gene was known for his kindness, tolerance, patience and acceptance of all. After a brief period of working at Beausejour Co-op he returned to finish Grade 12 where he caught the eye of Jennifer Sanders. Their relationship blossomed and they became the solid team they have been ever since. Jen and Gene married in 1975 and lived in Winnipeg, Fort Frances, Selkirk and again in Winnipeg. As their family grew, Gene supported Megan and David's endeavours in sports and music, and was always ready with a listening ear and the occasional bit of well-placed advice. He was the brother that Jennifer's sisters never had and could bring a twinkle to his late mother-in-law's eye like no one else could. Gene was dearly loved by his cousins, nieces and nephews, and their children.
Gene had a long working career and was a valued colleague at TD Bank, Focus Hyundai, and Diamond Wax. After retirement, he enjoyed travelling with Jen and their friends, spending time with his children and extended family, golfing, and watching sports. He was recently learning how to play Bridge and took up the guitar. He sold 50-50 tickets at Jets games where we're sure his understated charm closed many a transaction. He also volunteered at Siloam Mission. Whatever life presented to Gene, he welcomed with open arms.
Gene loved golfing. One of his greatest pleasures was being on the course with his brother, Neil, and his cousins. It is comforting to us that in Gene's last moments he was doing something he loved with two of his favourite people, Steve and Michael.
Gene was a kind and humble person, quietly inspiring those who knew him. He was deeply loved and his influence has spread further than he could ever have known.
A celebration of Gene's life will be held at Immanuel United Church, 755 Golspie St., Winnipeg, Manitoba on Wednesday, August 10, 2022, at 2:00 p.m.
In lieu of flowers, the family would be grateful for donations to The Ukraine Humanitarian Appeal of the Canada Ukraine Foundation.