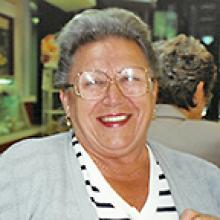 
Irene passed away on August 5, 2022, after a brief illness.
Irene was born in Tetange, Luxembourg, 1931. She had received her education in Belgium. Eventually Irene came to Canada in December 1956. A year later, she married Dmytro Stefurak on February 16, 1957. Irene resided in Winnipeg and retired in 1993.
Irene worked at Winnipeg Old Country Sausage Ltd.
Irene will be lovingly missed by her nephew Vasil Stefurak and numerous nephews and nieces in Belgium and Ukraine.
Irene was predeceased by her parents, Marianne Szymanska and Wladilaus Rebisz.
We would like to thank Grace Hospital and Beacon Hill Lodge for their kind attention to, and care of, Irene.
The funeral service will be held on Wednesday, August 10, 2022, at Korban Funeral Chapel, 907 Main Street.
In lieu of flowers, donations can be made to a charity of your choice.