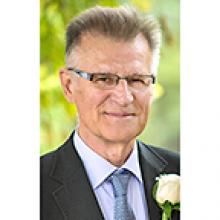 
After a courageous battle with a lengthy illness, Jim sorrowfully and peacefully passed away on August 5, 2022, in Winnipeg, surrounded by family, at the age of 78.
Jim was a devoted and loving husband, father, grandfather, uncle, friend, and teacher and he will be sorely missed. He was predeceased by his first wife of almost nine years Nancy Stephens (nee Peterson) and his mother Ethel Stephens (nee Collier). Jim is survived by his second wife of 35 years, Luella (nee Smith), his son Kristian (Jennifer), his daughters, Kelly (Jared) and Heather (Bobby), and his grandchildren, Lyla, Colton, Rachel, and Ryan. He also leaves behind many loved cousins, nephews, and nieces.
Jim was born in Toronto on August 24, 1943 but moved to Winnipeg when he was two. He then grew up with his mother and her family in Winnipeg. Jim attended both Mulvey and Gordon Bell Schools. He specifically enjoyed playing soccer and basketball. Jim was on the city's 1961-1962 soccer championship team.
From a young age, Jim had a passion and a growing talent for art. He used these traits to graduate from the University of Manitoba with a Bachelor's degree in Fine Arts in 1972. He then graduated with a Bachelor of Education in 1973. Jim taught fine arts for the next 25 years at Elmwood High School in Winnipeg to a few thousand grades 7 to 12 students. He often would help to ensure some of his students had lunch money. Jim took pride in the several murals that his students had created throughout the school. He also enjoyed being the school's basketball team coach in some of his early teaching years. "Steve", as he was known by many of his students, always enjoyed chatting with his former students when they met in the community.
Throughout his retirement, Jim created art as a member of the Manitoba Institute of Sculptors and Artists and the Winnipeg Sketch Club. He was an avid gardener and nature photographer. He stayed active by hiking, walking the family dogs, and playing basketball with his grandchildren. Jim enjoyed relaxing with music, reading a good book, watching movies, and spending time with family at the cottage by Lake Winnipeg.
The family would like to personally thank both (one) the Access River East's respite staff Kelechi (Casey) and Diane Sewell and (two) the staff on the third floor East at Concordia Hospital for their TLC of Jim.
A celebration of Jim's life will be held on Saturday, August 13, 2022, at 1:00 p.m. with a reception to follow at John Black Memorial United Church, 898 Henderson Highway, Winnipeg. Masks will be mandatory.
In lieu of flowers, please consider donating a non-perishable item for the West Broadway Community Ministry as per Jim's support for the community.