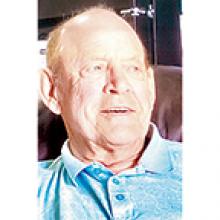 Donald Gunderson passed away July 28, 2022, at the age of 82.
He left to mourn his wife of 13 years, Sissel, his children, Greg (Susan), Bonnie (Brett) and stepchildren, Kathy (Andrew), Mike (Angela); grandchildren, Mike (Chrystal), Tanya (Nick), Hunter (Kaylie), Zachary (Gina), Andrew, Nicholas, Amelia, and Beau, and great-grandchildren, Corrinaa, Jaxson, Jace and Lexi. Siblings include Lloyd (Pat), Dennis (Judy), Murray, Donna (Ron) and Carol (Ron); and in-laws, Linda, Bev, Jan (Ina) and Glenn (Jeannie). Don was predeceased by his wife of 46 years, Irene, daughter Brenda, parents, Clarence and Laura; sister Esther and brother-in-law Victor; brothers, Carter, Raye and Edward, and mother-in-law Alida.
Don was a member of the Royal Canadian Legion #42 and the over 60 Club. He truly enjoyed spending time with his family and friends. He especially liked going on his annual camping and fishing trip as well as his travelling adventures - whether it was going to Texas for the winter or going on a trip to the casino. Don was always willing to help anyone with anything and would not rest until he "Got er Done".
A celebration of Donald's life will be held at the Royal Canadian Legion in Selkirk on Saturday, August 13 at 6:00 p.m.
In lieu of flowers, donations in his memory may be made to the charity of your choice.