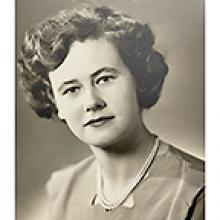 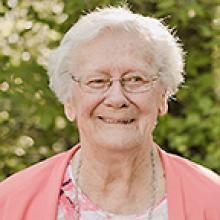 
It is with deep sadness that we announce the passing of our mother, grandmother and great-grandmother on August 3, 2022. Audrey passed away peacefully with her daughter-in-law Cindy by her side.
After a brief illness, we said our final farewell. Mom was blessed to constantly have family by her side for the month she spent in hospital.
Audrey is survived by her son Craig (Cindy); grandson Evan and granddaughters, Lauren (Jordan), Taylor (Braden) and great-grandson Rhys; son Keith (Janice); grandsons, Patrick and Jordan (Ashleigh) and son Rodney (Margaret Ann) and granddaughters, Katherine, Ashley and Laura.
Audrey was predeceased by her husband Bob who passed away January 5, 2022; her parents, David and Myrtle Cathers and her brothers, Mervin and Kenneth Cathers.
Audrey was born in Milwaukee, Wisconsin on October 5, 1928. After spending several years in the USA, they moved back to Manitoba, where they lived in Headingly and eventually settled in Woodlands. Mom attended business college in Winnipeg and was employed at Winnipeg Electric. She had fond memories of her time working in Winnipeg and spoke of the time that everyone was let go from work to assist with sandbagging during the great flood of 1950. She referenced the great friendships she made during her time there. Mom often spoke of playing baseball, she was quite proud to tell you that when a game was close, she was called in as the relief pitcher as she was left-handed.
On June 26, 1954, Audrey married the love of her life Bob Brad. They were married for 67 years.
They were so fortunate to have their three sons reside within a mile of their family dairy farm, where the boys worked side by side with their parents. Family was everything to Mom, she loved that Rodney joined her for breakfast, it was the highlight of her day and he kept her up to date with what was going on in the community. She spoke fondly of her time with Craig and was so proud of how he stepped up and took over the bookkeeping and day to day operations after the passing of Bob. She appreciated all the visits from the grandchildren, especially after Bob's passing, both at home and during her stay at the hospital. She was so proud of her grandchildren. She was very thankful that she got to meet her first great-grandchild Rhys, he was the apple of her eye. Rhys came numerous times to visit and she would light up – shake her head and say "he is such a good boy."
Over the years, Mom was extremely involved in her community. She was a member of the ACW, a 4-H leader, ran the canteen at Bingo (up until she was 88) and assisted at the Prairie Dog concession stand in Warren and Grosse Isle.
In her younger days, she loved gardening, her face lit up when you gave her any type of plant or flowers, she truly had a green thumb, she loved reading her daily Free Press, her People magazine, enjoyed watching baseball, curling, the Bomber games and rarely missed Wheel of Fortune and Jeopardy.
Mom was blessed with a sharp mind and a great memory. If you were lucky enough to be having a cup of tea with her, she would recount stories from her youth.
Mom spent a month between Stonewall and Teulon Hospitals in palliative care. We would like to thank all the staff that cared for Mom, noting the exceptional care that both Mom and family received from the following, Melinda, Kim, Joyce, Brenda and Ann.
Audrey's family would like to thank everyone for the many phone calls, messages, cards, flowers, food and baking, it means the world to all of us.
There will be a service for both Mom and Dad at a later date.
In lieu of flowers, donations may be made to a charity of your choice or to the Woodlands Community Hall, 204 Argyle Street, Woodlands, Manitoba, R0C 3H0 in memory of Mom and Dad.