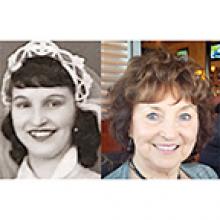 
Following a beautiful, sunny Sunday spent with family and friends, Mildred (Millie) went on to join her parents and siblings.
Predeceased by her parents, James and Catherine, husband Bill and all 10 siblings, she is survived by sons, Dwight (Kim), Miles (Chris) and adored granddaughter Jordan as well as numerous nieces and nephews.
Born on the family farm in Lockport to the spartan circumstances of the Depression, she grew up on the family farm with her numerous bothers and sisters. She met her future husband Bill while playing baseball in Winnipeg and they were married in 1953. In spite of medical challenges that occurred early in her life, Millie had a full working career, working for various private sector firms in clerical and administrative positions in addition to supporting Bill in his farming and business ventures. She retired from Canada Revenue but returned to work after becoming politically active, working as the Executive Assistant to city councillor Russ Wyatt.
Years spent supporting Bill in his business ventures and her sons in their sports, gave way to a new passion with the arrival of granddaughter Jordan, who became the new focus of her time and efforts. This would never waiver to her last day. She adored Jordan.
Following Bill's passing in 2009, Millie's own health started a slow but continuous decline. In spite of this, with fierce independence, she continued in an assisted living situation as long as her health permitted. Special thanks to her nieces, Barb and Heather for their support of Millie's desire to continue in assisted living for the last eight months and to Concordia Hospital staff in her final month.
Funeral service will be held at St. Andrews on-the-Red on Thursday, August 18 at 11:00 a.m. with interment to immediately follow in the church cemetery. Officiating is Rev. Merv Lanctot. Reception to follow at Larter's Golf Course.