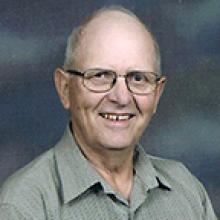 
Peacefully and surrounded by his loving family, Paul Johnson of Vogar, Manitoba passed away on August 8, 2022. He is survived by Beverley, his loving wife of 64 years, his children, Debbie (Werner) Pieterse, Lorraine (Kelly) Johnson, Greg (Teresa) Johnson, and Marlene Johnson (Brent) as well as 13 grandchildren, Kerner (Dani), Xander, Kajsa (Gerald), Sawyer (Melanie), Shea (Hailey), Shelby (Michelle), Troy (Vanessa), Chantelle (Kenny), Cole (Shanley), Keyra (Kalder), Joshua, Terrance, and Rhea and his great -grandchildren Kelly, Lewis, Tom, and Wilder. He is also survived by his in-laws, Carolyn Thorlacius, Neil and Anna Brandstrom, and Sharon Brandstrom as well as numerous nieces and nephews and many special friends.
He was predeceased by his parents, John J. and Annie Johnson (nee Bush), his brother W. John, sister-in-law Vera, parents-in-law Arne and Mae Brandstrom, brothers-in-law Wilfred Brandstrom, Oli Thorlacius, Edward Klepatz, and son-in-law Mel McKelvey as well as Mae's second husband Ralph Poston, special cousins Hulda and Skuli Thorsteinson, his grandparents, aunties and uncles, all of whom he had strong affection for.
Paul was born in Eriksdale, Manitoba to John J. and Annie Johnson; they were loving parents, and their sons were their everything. He was raised on the family farm in Siglunes where he developed his keen love of farming, hunting and the people of the area.
He met the love of his life, Beverley, in 1955 and they married on July 11, 1958. As a young man, Paul left the area he loved to earn money to buy their farm. He worked at Manitoba Bridge as an overhead crane operator. There he met lifelong friends that he loved hunting with every fall, especially his dear friend Larry.
In 1962, Paul, Bev, and Debbie moved to the farm. Paul was a true cattleman through and through. He started in dairy and commercial beef cattle, eventually transitioning the herd into a successful purebred Charolais operation, all the while clearing more land to build up the farm. As they grew the farm, they grew the family with the addition of Lorraine, Greg and Marlene.
Paul was an active community member and leader. He had a lifelong dedication to the 4-H beef program. As a child, he worked hard all winter getting his calf ready for the show. Later, he was very influential in the Dolly Bay Club and was a leader for many years. He loved the Lundar Fair and was proud to see his grandson Cole win Grand Champion steer this past June. This also brought back wonderful memories of when Greg won in 1978.
Paul also served as a Councillor for the RM of Siglunes.
Paul had great interest in his Icelandic heritage. He was proud of how his grandparents, father, aunties, and uncles endured the difficult transition of immigrating to Canada. He was also proud of his English Grannie Bush who raised 5 kids by herself during hard times. He came from tough stock.
With these roots, it is not surprising that he became an extremely devoted family man. He loved nothing more than being with his family and if you needed something, you didn't need to ask. He loved his family fiercely and was our greatest protector.
We are so sorry to lose you Dad, but as you always said, "thad gengur svona."
A Celebration of Life will take place at the Siglunes Community Hall on Saturday, August 20, 2022, at 2:00 pm.
If friends/family so desire, donations can be made to the Siglunes Community Club for the Vogar Cemetery, Box 6, Vogar, MB R0C 3C0.