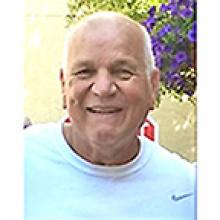 
With profound sadness, we announce the sudden death of our beloved Patrick on August 10, 2022 in St. Catharines, Ontario.
Pat was born in London, England on January 30, 1946. He grew up in Winnipeg, but left at a young age to travel and see the world. Pat was a wonderful athlete and excelled in long distance running in his younger years. As an adult, he took up tennis and fell in love with the game. He practiced daily (even during Covid) and played weekly until his death.
Patrick was preceded by his loving parents, Albert and Blanche Powis, his sister Lynne and brother-in-law Ron Kirshner, his brother Edward Powis, his sister Suzanne Powis and his much adored daughter Patricia Powis. He is survived by his precious children: his son Patrick and his wife Sandra Powis, his son Sebastian Powis and his wife Jessica Daye and his loving daughter Bianca Powis. He is also survived by his sister Georgeline and brother-in-law Peter Lengyel and his sister Margaret Powis. Pat had many nieces and nephews, and grandnieces and nephews who he loved dearly. He had a special relationship with his niece Camille and her husband Brian Koscak. But, in his last few years, his greatest joy was the time spent with his two beautiful grandsons, Elijah and Isaiah Powis who he loved with all his heart.
Our hearts are broken, but it gives us comfort to know Pat died how he always said he wanted to ... on the tennis court hitting balls.
Due to the sudden loss, the family has decided to keep the interment private.
In lieu of flowers, anyone who wants to honour Pat, is asked to make a donation to the "MS Society" in memory of his daughter Patricia.