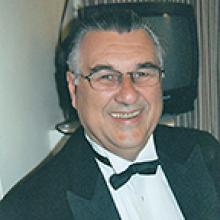 
It is with heavy hearts that we announce the passing of Theodore (Ted) Thomas Baron on July 28, 2022.
Ted is survived by his daughter Jennifer and his two grandsons, Thomas and Nicholas Montemarano of Toronto. He was predeceased by his wife of 58 years, Carole Ann and his parents, Tom and Jessie Baron of Winnipeg.
Ted was a Winnipeg boy through and through. Born, raised, and educated in Winnipeg. Ted remained in his community throughout his family life, working career and retirement.
Early on in life, Ted successfully realized his entrepreneurial skills through ownership of Lombard Graphics and Magicuts Franchises across Western Canada from 1984 to 2002.
Ted was a longtime member of the Winnipeg Squash Racquet Club, the Scottish Gentlemen's Club and the Manitoba Club. Ted always said that it was through these memberships that he honed his skills in pool playing, scotch drinking and cigar smoking. During this time, Ted made many friends that remained constant throughout his life.
For all who knew him, Ted will be remembered and missed for his generous heart and quick wit. Always a loving, kind father and grandfather, Ted will be greatly missed and forever remain in the memory and hearts of Jennifer, Thomas and Nicholas.
A special thank you to Verlina Aquino for her ongoing support and caregiving to our family. Thank you to his longtime physician, Dr. P. Mehta and the entire team of doctors and nurses at Grace Hospital who saw Ted through his final days.
A celebration of Ted's life will take place at 11:00 a.m. on Wednesday, August 24, 2022 at Neil Bardal Funeral Centre, 3030 Notre Dame Avenue.
In lieu of flowers, please consider a donation to The Bill and Helen Norrie Library or in Ted's spirit, quietly pay it forward to a worthy cause or a person in need.