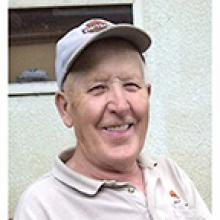 It is with heavy hearts that we announce the passing of our dear father, partner, brother, gigi and friend. On the early morning hours of August 13, 2022 at the young age of 85, Albert drew his last breath, and then was united with God.
Albert was predeceased by his wife of 47 years, Nataulia and he leaves behind his common-law-partner and friend Sue; his sons, Darrell (Jenn) and Ken (Cyndi); his grandchildren, William and Amanda and his great-grandson Trevor. He also left behind his sisters, Anne (Leon), Rose (Orest) and Jean (Monty) and his sister-in-law Bev (Hector).
Albert, when he was young, grew up on a farm north of Swan River, and it was there that his father Peter taught him how to repair engines, do carpentry, or just be a jack of all trades.
When he grew up, he then moved to Winnipeg, where he met Nataulia, got married, and went into business as a mechanic. He spent his entire life following his passion, working on vehicles, snow blowers, lawnmowers, etc.
Working on machinery was a part of his passion, but the greater part of that passion was talking and joking with his customers and clientele. He could spend hours explaining how an engine worked.
His likes, away from engine repair was fishing, golf, hunting and nature. Then, later on in life when his mobility became limited, he would spend hours each winter assembling puzzles, the harder, the better. He would be so proud when he would assemble a 1000 piece multi-coloured puzzle.
Rest in peace Albert (dad, gigi) we love you, and your glowing presence will be missed.