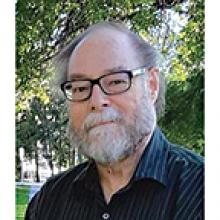 
Howard Curle passed away on August 12, 2022, at age 74. He was a beloved husband, brother, uncle, friend and teacher.
Howard is survived by his wife of 32 years, Bev Phillips; his brothers, Wayne (Marj) and Warren (Teri); niece Riley (Kevin Hirschfield); brothers-in-law, Cliff Hodgins (Cyndi, niece Nikki and nephew Alex) and James Hodgins; special friends, Deb and Tess McMorran; and many cousins and good friends.
Howard was born on July 23, 1948, to John and Mary (Johnny and Mollie) Curle. He grew up in St. James, and enjoyed playing outdoors with his brothers and attending Scouts. At St. James Collegiate, Howard caught the theatre bug, appearing in school plays. He earned a BA in History at the University of Winnipeg (U of W) where he wrote for the student newspaper, helped run the student film society, and greatly enjoyed the challenges of academia. Howard followed in the Curle family tradition and worked at Eaton's for several years, mostly in the book department, and also worked at Mary Scorer Books. Thanks to his years as a bookseller, he was talented at giving just the right books as gifts.
Howard took theatre courses at the University of Winnipeg and film courses at the University of Manitoba (U of M). In 1978 he joined his friend John Kozak at New York University, and earned a Masters in Cinema Studies. In 1990, he started teaching regularly at the U of M, and during that time he co-edited a book on Vittorio De Sica with his colleague Steve Snyder. In 2005 he moved to the University of Winnipeg , where he taught until retiring in 2019. Thanks to the generous staff at the U of W Theatre and Film Department for helping him finish his last academic year. As well as teaching, Howard was involved with the Winnipeg Film Group and was a good friend of the late Dave Barber. He appeared in many films made by local filmmakers, and in dozens of films made by his U of W students.
Everyone who knew Howard remembers his gentle nature, his smile, and his abiding genuine love of cinema. He was devoted to teaching and to encouraging young filmmakers. More than a few people have called him "a film encyclopedia." He also had a wide range of other interests including literature, music and history, and constantly acquired new interests throughout his life. The Millennium Library was one of his favourite places.
Howard and Bev loved to travel together, in Europe, the U.S. and Canada, and especially New York. Closer to home, they enjoyed vacations in Gimli and nights out at Goldeyes games. In the last few years, Howard was able to keep attending movies, plays, operas, and concerts.
Howard was diagnosed with multiple myeloma in the fall of 2018. Thank you so much to the wonderful team of professionals at CancerCare Manitoba who provided excellent medical care with kindness and consideration. Dr. Rami Kotb led the hematology team. A special recognition to Jayne Kasian, our nurse-practitioner who guided us for almost four years with gentleness and confidence. Also, thanks to the Palliative Care Program and Riverview Health Centre for looking after Howard in his final days.
A Celebration of Life will be planned so the many people whose lives were touched by Howard can share their memories.
Donations to CancerCare Manitoba, the University of Winnipeg or any other educational institution would be welcome.