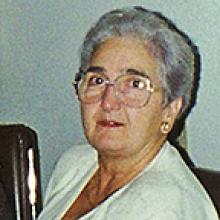 It is with great sorrow that we announce the passing of our much beloved mother Vittoria Carbone.
Vittoria is survived by her daughter Caterina (Sonny); son Stanislao (Anna); granddaughters, Francesca (Richie), Leyla (John Paul); great-granddaughter Azra; sister Giulia (in Switzerland) and numerous nieces and nephews in France, Switzerland, and Italy. She was predeceased by her loving husband Rocco; parents, Maria Candalise and Francesco Lopez; brothers, Salvatore and Luigi; and sisters, Caterina, Mariarosa and Teresa.
Vittoria was born on July 7, 1929, in San Giovanni in Fiore, Italy. She grew up in strenuous socio-economic circumstances and experienced the turmoil brought about by the Second World War, a scenario rendered more difficult by the death of her father when she was in her teens. She would describe her childhood and adolescence in vivid and unsparing terms, while not forgetting the good times she shared with family and friends, and often reflected on her ability to carve a meaningful life, before and after she married Rocco in 1951, with whom she had two children, Caterina, born in 1953 and Stanislao in 1957. Long before the term multitasking became everyday parlance, in addition to handling most of the household duties, she was an accomplished seamstress and tailor, who often taught others the tricks of the trade.
Vittoria arrived in Canada on October 2, 1960, with her children to join her husband who had migrated earlier in the year. Life in the new land was challenging to say the least. It was a testament to her great moral strength, determination, and intelligence that she was able to navigate her way through the intricacies of daily life, including adapting to a new cultural and linguistic environment and establishing a loving, compassionate, and enriching home life. And no matter what difficulties were thrown her way - and make no mistake about it she encountered many - she met them head on with a sense of optimism and resolve that was a sight to behold and a living testament to the resiliency of the human spirit.
Over the years Vittoria worked as a seamstress in various garment factories, such as Frankroy's, Sterling Stall and Neaman Furs. She would often talk about her work experiences, and her relationships with fellow workers, most of whom were immigrant women of various ethnic backgrounds with which she likened to a sorority. She looked beyond the differences and chose to focus on the values and experiences they had in common. This reflected her sense of working-class solidarity that was an integral aspect of her personality going back to her childhood in Italy. She was a mentor to the younger Italian women helping then to adjust to the complexities of factory work. Many of them affectionately referred to her as "mamma Vittoria". Never judgmental in how she approached others, Vittoria was accepting of all people regardless of their ethnicity, religious background, or sexual orientation - although she did have a bone to pick with the powerful and wealthy. This was in keeping with a value system rooted in egalitarian principles and unwavering belief in a just and equitable world.
The last few years of Vittoria's life journey were difficult, and it must be stated, at times unbearable. She was besieged by physical maladies that greatly reduced her mobility and vision. The passing of her beloved Rocco, whom she tended to with loving care when his health was failing, was to exact a great emotional toll on her. Toward the end of her life, COVID reared its ugly head preventing us from spending quality time with her and she had to contend with the onset of dementia which fortunately was unable to rob her of her ability to recognize, audibly, family members and friends, though it did change her behavioral patterns in other ways. These had an incalculable impact on her. This was after all a woman who exuded optimism and nurtured an independent spirit - characteristics that were now being assailed and eroded. And yet from time to time they would re-appear ready to re-assert themselves, a reminder that to the end she sought to have as much control over her environment as was possible considering the circumstances. And when everything is said and done, her assertiveness came to the fore when she was fully aware of the limits of her mortality and accepted with great courage and dignity the fact that her life's journey had come to an end.
The family would like to thank all those who stood by Vittoria's side and expressed their concerns for her general welfare and condition. We thank the many health care professionals and volunteers who over the years tended to Vittoria's needs. She was unflinching in her trust of our public health care system. Their efforts are greatly appreciated and further confirmation of the valuable role they play in ensuring our collective well being. They deserve our respect and support. A special word of thanks goes to the staff and residents of Concordia Place Personal Care Home. While the decision to place a parent in a personal care home can be agonizing and not without a touch of guilt, we were to discover that our mother was in good hands and would be accorded the care she deserved.
In lieu of flowers, a donation can be made to a charity of your choice.
Mass of the Resurrection will be held on Thursday, August 25, 2022 at 11:00 a.m. at Holy Rosary Roman Catholic Church, 510 River Ave., Winnipeg, MB, with condolences and viewing at 10:00 a.m. Rev. Father Sam Argenziano presiding. The Funeral Mass will be livestreamed https://youtu.be/4LGOd5i6rj4.
Honorary pallbearers will be Massimo Girimonte, John Paul Hernandez, Richie Jones, Battista Lomoro, Salvatore Paletta and Giuseppe Romeo.
Entombment will take place at Holy Angel Mausoleum #1 Hwy. E., Green Acres Cemetery.
For online condolences or to light a memorial candle please log on to www.mosaicfunerals.ca.