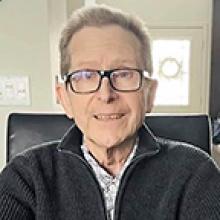 
It is with great sadness that we announce the passing of Peter Michael Carnegie, husband, father, and grandpa. Peter passed away peacefully, surrounded by his family, on August 18, 2022, at Jocelyn House Hospice, a month shy of his 81st birthday.
He is survived by his wife Marlene (Strobbe), children Sean (Jamie) Carnegie and Shannon (Glenn) Andersen. Peter was very proud of his grandchildren, Hannah (Devin), Meghan and Ella.
Peter was born and raised in Winnipeg. As a teen, Peter was an accomplished hockey player, earning the lifelong moniker of "Pistol Pete - sweet around the net". Peter met his love and life partner Marlene in 1967 when they worked together at the University of Manitoba Bank of Montreal campus branch. They married in February 1970, celebrating their 52nd wedding anniversary earlier this year.
Peter's career in banking took him and Marlene back and forth across Canada with Sean and Shannon in tow with stops in Montreal, Oakville, and Calgary, finally returning home to Winnipeg permanently in 1988. After leaving the Bank of Montreal at the age of 50, Peter began building a new career in public service, demonstrating incredible resilience and determination during this unplanned transition. As a Case Administrator with the Public Trustee of Manitoba, he skilfully and compassionately cared for vulnerable citizens and went above and beyond to ensure their well-being.
A beach bum through and through, Peter enjoyed the family cottage at Grand Beach since his childhood and has passed this love on to his family. In retirement, Peter and Marlene spent 12 winters in Destin, Florida, enjoying the sun and surf each day. He and Marlene have a large and vibrant network of friends in Winnipeg, Grand Beach and Destin, a testimony to his fun loving and social nature. Peter was an avid fan of the Minnesota Vikings, Winnipeg Blue Bombers, and Winnipeg Jets, and loved watching golf.
Peter successfully defeated prostate cancer following his diagnosis in 2012. He was later diagnosed with pancreatic cancer in 2017 and with fierce determination battled the disease, beating all the odds. He always credited the success of his fight with cancer to the strong support network he was fortunate to have. With Marlene by his side, Shannon and Glenn as advocates and the rest of his family and friends supporting him along the way, he was able to enjoy several more summers at the beach and lots of family time.
Marlene and family would like to thank the staff at CancerCare Manitoba, especially Dr. Wong and Dr. Beshara, and the staff at the Buhler Cancer Centre, Riverview Health Centre, and Jocelyn House where Peter spent his final weeks. Their kind and attentive care for Peter and our family is so appreciated.
Peter was predeceased by his parents, Alyce Kerslake, Frank and Elsie Carnegie and parents-in-law, Rene and Judith Strobbe.
Peter's Celebration of Life will take place on Friday, August 26, 2022, at 2:00 p.m. at the Centro Caboto Centre at 1055 Wilkes Avenue.
The family graciously declines flowers, to honour Peter's memory, donations to Jocelyn House Inc., 177 Egerton Road, Winnipeg, MB R2M 2W7 would be appreciated.