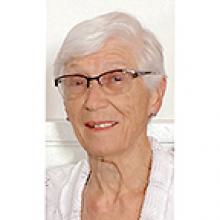 
On August 16, 2022, in her sleep, Vienna (Grey) Black passed away at Grace Hospital, with her husband Norm Black by her side.
I was born in Winnipeg on February 23, 1936. Spent the six war years with my Mother at my Grandparent's farm at Lockport. Attended Gonor School during that time. Dad came home from the war and we moved to Elmwood. Attended Sir Sam Steel, George V, and Tec Voc Schools. The highlight of my school years was being chosen Valedictorian at Tec Voc 1955.
I am survived by one brother. Met the love of my life Norm and married and raised three six foot plus boys. Neil (Debbie), Craig (Dee) and Dale (David). Grandchildren, Erin, Kyle, Brent and Amy and now five great-grandchildren, Mason, Ayla, Freya and Wren and Ana. I was stay at home Mom but later worked for the EK Examiner and River East School Division. I was at Bertrun E Glavin School for many years. After retirement we moved to Gimli. We camped across Canada and took in many cruises to different places.
In lieu of flowers, donations to be made to CancerCare Manitoba or Operation SMILE.
Funeral will be held August 29 at 2:00 p.m. at Glen Eden Funeral Home, 4477 Main St., West St. Paul, MB.