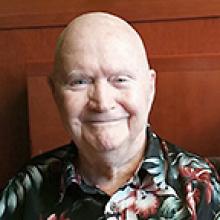 
Thomas (Tom) Barker passed away peacefully on August 22, 2022, at the age of 91, with his loving wife Madge (Madeline Lucas) by his side, just two weeks shy of their 70th wedding anniversary.
Tom is survived by his wife and lifelong partner Madge. He is also survived by his four children and six grandchildren: John (Barb Eros), Gillian, Devin and Aidan; Geraldine Dielschneider (Gary), Megan (Brandon) and Brittney; Susan Spelchak (Randy), Bryan (Nicole); and Paul; and three great-grandchildren, Lucas and Sara (Megan) and Everly (Bryan); and his sister Margaret Dumont.
Tom was born in the small southwestern Ontario community of Durham on October 12, 1930. As a creative youth, he did many drawings inspired by the Second World War and, later, by his love of cars. As a teenager, he was active in hockey and lacrosse and wrote about the local senior hockey team for the town newspaper.
On September 5, 1952, Tom and Madge were married in Toronto, moving shortly thereafter to Durham. Both he and Madge were excellent five-pin bowlers in their early married years and between them, won a number of trophies. Tom learned to build furniture at the Durham Furniture Factory and continued to exhibit his creativity by designing and building much of the furniture in their home. A prolific model builder, Tom built numerous model ships and airplanes. He turned this talent into Tom's Hobby Centre, a store he owned and operated with Madge in Durham before they moved the family to Winnipeg in 1964. There, he worked at a number of jobs, including window and door manufacturing, building rec rooms and at the City of Winnipeg Insect Control Branch.
Tom loved his cars and in 1967 had the good fortune of acquiring one of his favourites - a 1967 Pontiac Parisienne convertible. He kept that car in pristine condition until selling it back to the dealership many years later.
Tom and Madge liked warmer climes and eventually bought a small winter home in Florida which they enjoyed for many years. After giving up the Florida winter home, they travelled a fair bit, including trips to Portugal and Morocco, Mexico and Hawaii. They enjoyed several cruises, especially one that took them through the Panama Canal - a highlight for Tom.
A quiet, understated man, Tom was a good father and a devoted husband who worked tirelessly to provide for his family. In recent years he experienced declining health and was cared for unfailingly and lovingly by Madge.
Sincere thanks are extended to Winnipeg Regional Health Authority Home Care Services personnel for their kindness to Tom.
As per Tom's wishes, no formal service will be held.