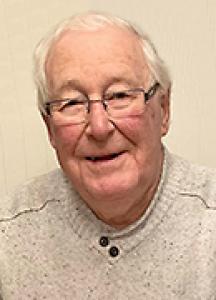 SCOTT: Gladwyn Lyle passed away peacefully with family by his side on August 25, 2022, at the age of 90 years. He is survived by his loving wife of 61 years, Marguerite and their four children, Michelle (Brent) McMillan, Jeff, Rick, and Sharla (Will), grandchildren, Josh and Camryn McMillan, Brooke and Graeme Scott, sisters Gayleen Stimpson, Barb (Peter) Mikulin and brother Glennis (Faun), brother-in-law, Harold Kopetsky and Bob (Dona) English, sisters-in-law, Leona Neubauer, Dorothy Kudlovich, Florence Phillips, and Jan Cox. He was predeceased by sisters, Lorrene Kopetsky and Fran Doroschuk, brothers-in-law, Merv Stimpson, John Doroschuk, Roy Neubauer, Tom Kudlovich, Sam Phillips, and Tony Cox, sister-in-law Margaret English. Gladwyn was born on January 28, 1932, in Hamiota, MB and was the eldest of Jim and Merle Scott's six children. He received his first 11 years of education in McConnell before graduating from Grade 12 in Strathclair. He received the gold medal in physical education upon graduation from the Manitoba Normal School in Winnipeg in 1951. He taught school in Foxwarren, Cardale, and Hamiota, was principal for seven years at Carman Elementary School, served for 13 years as superintendent of the Souris Valley School Division #42, and superintendent of Interlake School Division #21 for eight years. He was awarded a Bachelor of Science degree in 1961 from Brandon College where he served as the president of the student body and was awarded the Jim Casey trophy for combining leadership, athletic ability, and sportsmanship. He received his Bachelor of Education degree in 1965 and a Master of Education degree in 1977 from the University of Manitoba. He married Marguerite English July 29, 1961, and was very active in education, sports, and recreation when they lived in Hamiota, Carman, Souris, Warren, Stonewall, and Carberry. He was a life member of the Manitoba Association of School Superintendents after 21 years of service. He was very involved in sports as a player, coach, and organizer and was elected to several Halls of Fame – Manitoba Baseball, Manitoba Hockey, Manitoba High School Athletics Association, Brandon University, and Manitoba Sports. Elected into the Canadian Baseball Hall of Fame in 2008 in St. Mary's, Ontario was a highlight. He received the Golden Hand Award for Manitoba Media and was the recipient of three Queen Elizabeth II medals – 1993 in Teulon (125th Anniversary of Confederation), 2002 in Carberry (50th Anniversary Golden Jubilee), and 2012 in Brandon (Queen's Diamond Jubilee) for services to the community and country. He co-founded the Manitoba High School Athletics Association in 1962 and the Manitoba Baseball Hall of Fame in 1997. Simultaneously, he was Past President of both Hockey Manitoba and Baseball Manitoba. Lifetime Achievement Awards were presented by the Manitoba High School Athletic Association and the Carberry Chamber of Commerce. Most recently, he was awarded Honourary Life Membership in the Manitoba Baseball Hall of Fame Gladwyn was a people person who enjoyed writing stories in the various weekly newspapers where they lived. He served on the United Church Ministry and Personnel Committees in Souris, Warren, Stonewall, and Carberry. He travelled from Victoria, BC to St. Johns, NL and many places around the world such as Cupar, Scotland, Sydney, Australia, and Zurich, Switzerland. He touched many lives and took great pleasure in volunteering and coaching for all those years, working with and meeting so many fine people. But above of all, he loved Marguerite and was proud of their four children and four grandchildren, and their activities. A service to celebrate Gladwyn's life will be held at the Carberry Community Hall, Carberry, MB on Friday, September 2, 2022, at 2:00pm followed by fellowship and refreshments. A private interment will take place at the Carberry Cemetery. For those so desiring, donations may be made in Gladwyn's memory to the Carberry United Church, Box 239, Carberry, MB, R0K 0H0; or to the Manitoba Baseball Hall of Fame, 111C Gilmour St, Morden, MB, R6M 1N9 (www.mbhof.ca). Messages of condolence can be shared
at