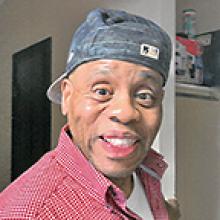 
Peacefully, with his family by his side, Keith Darryl Travis passed away at the St. Boniface Hospital on August 24, 2022, at the age of 62 years.
Left to forever cherish his love and memory are his wife Tea and daughter Sydney.
Keith was born on February 26, 1960 and grew up in Peekskill, New York. Keith was the oldest boy amongst his siblings and proceeded to be and represented what a father figure is supposed to be for his younger brother Eric. Keith served in the military for a few years which ended up being based in North Dakota. During their time off, he would come up for a drive in Winnipeg, and eventually fell in love with the city. After serving, he moved to Winnipeg for good and landed a job at the University of Manitoba as an Academic Program Administrator in the Chemistry department. He was with the university for over 30 years. Alongside with his job, Keith participated in volunteering at the Siloam Mission kitchen and drop-in, serving the community weekly since 2011, where he met the love of his life, who eventually became his wife in 2015, Tea and gained a daughter, Sydney. Unfortunately, after only four years into the marriage, at the year of 2019, Keith was diagnosed with a stroke and diabetes which led him to eventually leave the university. Keith fought a good fight for over two years with Tea's loving care but eventually, as every soldier gets tired, Keith eventually decided that it's time to rest.
Keith was a strong-willed individual with so much faith that death itself was not to be feared by him. We are comforted and at peace knowing that he is resting in paradise. He will be lovingly missed.
Friends and family are welcome to come celebrate Keith's life which will be held on September 3, 2022 at 10:00 a.m. at Thomson "In the Park" Funeral Home and Cemetery.
In lieu of flowers, donations can be made to Siloam Mission, in memory of Keith Travis.