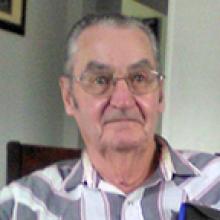 
It is with deep sadness that we announce the passing of our loving husband, father and grandfather, Lawrence Sinnema, on Saturday, August 27 at the age of 88 years.
He is survived by his wife of 69 years, Shirley, his daughter Lori Frank (John), grandson Christopher Kerslake (Katelyn), great-grandchildren, Sophia and Max, niece Loreen (Rob), nephews, and friends, Donna Ptosnick and Gail Sabanski that we all think of as family.
Lawrie was predeceased by his parents, Lawrence and Myrtle, mother and father in-law, George and Lily Gill, daughter Kim, son Larry, sister Prim, brother Donnie, uncle Jacob, son-in-law Ron and his furry family members, Dukie and Duchess.
Born in Winnipeg to Lawrence and Myrtle Sinnema on December 28, 1933, Lawrie grew up in Fort Garry and spent all but six years living on Boston Avenue. He met Shirley when he was 16 and she was 15. They got married three years later and bought a house a half block down from where he grew up. They spent the last 69 years there and enjoyed every minute of it.
Lawrie got his apprentice certificate and then began his electrical career. He worked for Kummen-Shipman for the first part of his career then for Johnson Controls until he retired. He loved his job and worked in a lot of different locations. He was away from home sometimes for up to four months at a time and spent many nights sleeping in tents at 30 to 40 below zero. He worked on the DEW line, in the Arctic, in Thule, Greenland and spent a lot of time in his career working in Northern Manitoba. He never ran out of fun and interesting stories about his travels with his job. He met so many people and made a lot of friends wherever he went. Lawrie was an avid gardener and very proud of his garden and yard. He loved going camping and spending time with his family, cooking and animals of any kind. He had the biggest, kindest, softest heart you could ever imagine and would always lend a helping hand to anyone who needed it. He will be greatly missed and forever loved.
In accordance with Lawrie's wishes, cremation has taken place and no formal service is planned at this time. A celebration of his life will take place at a later date.