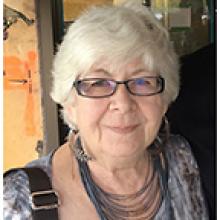 
It is with great sadness that we announce the passing of Colleen Bucklaschuk, devoted wife, mother, and grandmother, on August 29 after a brief illness.
Colleen was a loving wife to her husband, John, for 54 years, a dedicated mother to her children, Tara and Tyler (Michelle), and an adoring grandmother to her grandchildren.
Colleen was born in Virden and is survived by her sister Maureen Chalmers, her brother Keith Hagan (Mary Anne), Shawne Hagan (Jocelyn) and brother-in-law Bill Dutton, as well as her sisters-in-law, Winnie Danyluk and Elsie Naherniak. Colleen is survived by her grandchildren: Colby (Janine) Bucklaschuk, Tyson Bucklaschuk, Raven Valgardson, Recene (Jason Edye-Rowntree), and Nikolas (Amey) Young, eight great- grandchildren and many nephews and nieces.
She was predeceased by her parents, Edward and Tena Hagan, her sister Donna Dutton, and infant brother Jordan Bradley Hagan, and brother-in-law Harvey Chalmers.
Colleen graduated as a teacher from Brandon University in 1965, started her teaching in Melita, followed by a year at Allard School in St. James and two years at King Edward School in Brandon. At that point, she became a full-time mother to Tara and Tyler, followed by a move to Killarney, where her husband taught for five years. This was followed by a move to Selkirk, when her husband made a career change and then by a final move to Gimli where John was elected as the M.L.A. for Gimli. In 1988, John and Colleen entered the business world by creating two new businesses in which Colleen was a partner until her passing. Colleen was a vital part of these businesses, contributing to their success and absolutely loved the involvement with the thousands of clients during the last 34 years of business. At all times, Colleen had been a pillar, supported every decision that was made and hugely contributed to every undertaking.
She will be fondly remembered for her passion for baking and cooking a good meal. The table was always beautifully set. Her home, and all of its vibrant colours and decor, represented her creativity. She loved going to the West End Cultural Centre for folk concerts, which was always accompanied by a nice dinner at a nearby restaurant.
A Celebration of Life will be held on September 24 at 1:00 p.m. at the Johnson Waterfront Centre in Gimli. All friends are invited to attend.
In memory of Colleen, donations may be made to the Heart and Stroke Foundation or another charity of one's choosing.


Condolences may be left on her tribute wall at www.gilbartfuneralhome.com
Gilbart Funeral Home, Gimli
in care of arrangements.