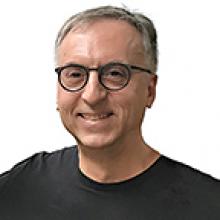 
It is with heavy hearts that we mourn the passing of our friend, relative and colleague William (Bill) Poluha. Bill was predeceased by parents William and Nellie Poluha and is survived by many extended family and friends. Bill passed peacefully at St. Boniface Hospital on August 20, 2022.
An active member of St. Andrew's Ukrainian Catholic Church in Winnipeg, Bill grew up in the Wolseley neighbourhood of Winnipeg, attending Laura Secord School and Gordon Bell High School. Many friendships made at Gordon Bell lasted a lifetime, and the experiences there left a lasting impression on Bill. Education continued at the University of Winnipeg where Bill graduated in 1983, majoring in physics, with a B.Sc. (4-yr).
Bill attended McMaster University in Hamilton, Ontario, where he graduated with an M.Sc. (Health and Radiation Physics) in 1986. Work experience in that program involved an internship at AECL Whiteshell in Pinawa, Manitoba. After graduation Bill worked in the private sector in Ontario in nuclear waste management. He built a solid reputation for high quality customer service and reliable work in a highly demanding and regulated industry.
Eventually Bill's passion for education and research called him to a career change and he returned to school to pursue library science. He graduated with a MLIS degree in 1994 from the University of Western Ontario. As always, he made many new friendships that lasted his lifetime.
Called home to Winnipeg in 1995 to both assist his aging mother and to take a position with the University of Manitoba's Medical Library, Bill began a new facet of his life. He quickly developed a reputation for high quality research work, and for being a caring and supportive mentor for both colleagues and students. In one of those twists of life, the conversation that began between student and librarian continued between doctor and patient in the final weeks of Bill's life at St. Boniface hospital where Bill found himself under the care of Dr. St. Goddard.
Bill's career with the UM saw him move to the Science and Technology Library at the Fort Garry Campus and take on a very active role in the University of Manitoba Faculty Association and the Manitoba Federation of Labour as a safety and health committee rep and a picket captain. Bill was also an active member and avid supporter of the UM faculty Club.
In parallel with his professional work, Bill pursued his love of travel, food, wine, beer, and golf. So many friends remember fondly the trips taken, meals shared, beverages consumed and rounds of golf with Bill. And with each encounter Bill shared his vast knowledge and experience that enriched the lives of those he was with. He was a proud member and accredited judge with the Kansas City BBQ Society, regularly making trips with friends to competitions to both compete and judge.
The diagnosis of illness that came in April 2019 did not dampen Bill's enthusiasm for life and adventure, and he packed a lot into those few short years. The pandemic meant that many visits were virtual and the rounds of golf fewer, but the food and the beverages were real, and the conversations were always entertaining and memorable. One final trip to Europe capped off a life too short.
All who knew Bill express their deep appreciation to the staff of the Palliative Care Ward at St. Boniface Hospital and for the care that he received at CancerCare Manitoba. Always keenly interested in the people around him, Bill left a lasting impression on many staff through his conversations and his caring.
Being Bill's friend was an investment, but one that paid rich dividends. You were truly a better person for knowing Bill, and his legacy shall live on in so many of us.
There will be viewing from 9:00 a.m. to 10:00 a.m. followed by the Funeral Divine Liturgy and Panachyda at 10:00 a.m., Saturday, September 10 at St. Andrew's Ukrainian Catholic Church, 160 Euclid Ave. with Fr. Dmytro Dnistrian, CSsR officiating. We ask that guests wear masks coming in and leaving the service. Masks may be removed once seated, if desired. Interment at Holy Family Cemetery will occur on September 19, 2022, at 2:30 p.m. In lieu of flowers, donations may be made in Bill's memory to CancerCare Manitoba Foundation, 675 McDermot Ave., Rm. ON1160, Winnipeg, MB, R3E 0V9.